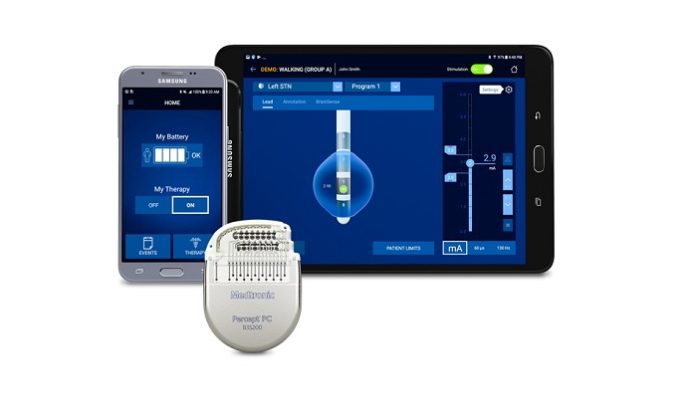 Medtronic plc announced the CE Mark for Percept PC neurostimulator; it is the only Deep Brain Stimulation (DBS) system to be launched in the European Union (EU) with BrainSense technology that can sense and record brain signals while delivering therapy to patients with neurologic disorders, such as Parkinson’s disease. BrainSense technology enables physicians to track patient-specific brain signals and correlate these with patient-recorded events, such as symptoms or side-effects associated with their disease or the medications to treat it. This enables more personalized, data-driven neurostimulation treatment.

The Percept PC neurostimulator is approved in the EU for the treatment of symptoms associated with Parkinson’s disease (PD), essential tremor, primary dystonia as well as epilepsy and obsessive-compulsive disorder (OCD). It is currently under review by the U.S. Food and Drug Administration.

“DBS is proven to significantly improve motor function in people with Parkinson’s disease compared to standard medication alone – but with currently-available systems, physicians need to make therapeutic decisions mostly based on clinical assessments and patient-reported information,” said Professor Andrea Kühn, head of Movement Disorders and Neuromodulation, Charité University Hospital, Berlin. “Percept PC with BrainSense technology is a game changer. Patients and their care teams will have objective patient-specific brain signal data – including data recorded outside the clinic in patients’ everyday lives. With this technology, doctors could tailor therapy more precisely to the individual needs of each patient based on data from neuronal activity.”

The Percept PC neurostimulator will be available in Western Europe beginning January 15th and will launch in additional regions based on local regulations.

“With the Percept PC device with BrainSense technology, Medtronic is truly reinventing DBS therapy, propelling it into a new frontier and empowering clinicians with new options to bring the future of DBS to patients today. Doctors can directly assess patients’ brain signals to inform and provide customized treatment for each patient,” said Mike Daly, vice president and general manager of the Brain Modulation business, which is part of the Restorative Therapies Group at Medtronic. “Patients are empowered to take an active role in their therapy, and physicians can deliver data-driven, personalized therapy that fits the needs of patients, now and in the future.”

DBS therapy is currently approved in many locations around the world, including the United States and Europe, for the treatment of recent and longer-standing Parkinson’s disease, essential tremor, primary dystonia, the disabling symptoms of epilepsy and treatment-resistant obsessive-compulsive disorder.

DBS therapy uses a surgically implanted medical device, similar to a cardiac pacemaker, to deliver electrical stimulation to precisely targeted areas of the brain as adjunctive treatment for several neurological disorders. Medtronic was the first in the United States to offer full-body MR Conditional DBS systems for patients to have safe scans anywhere on the body under certain conditions. Since 1987, more than 150,000 Medtronic DBS devices have been implanted worldwide for movement disorders and other indications.

Medtronic plc (www.medtronic.com), headquartered in Dublin, Ireland, is among the world’s largest medical technology, services and solutions companies – alleviating pain, restoring health and extending life for millions of people around the world. Medtronic employs more than 90,000 people worldwide, serving physicians, hospitals and patients in more than 150 countries. The company is focused on collaborating with stakeholders around the world to take healthcare Further, Together.