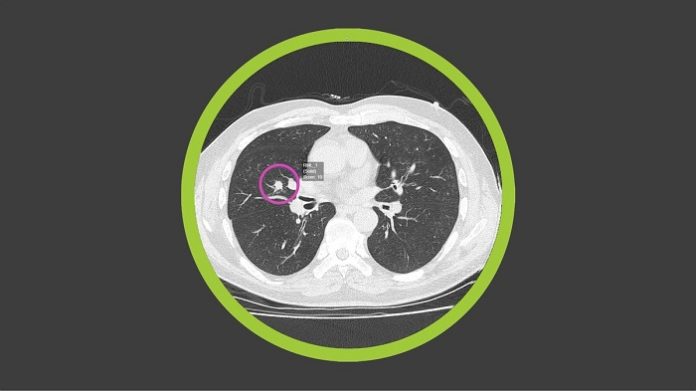 Optellum, a lung-health AI company has entered a strategic collaboration with the Lung Cancer Initiative at Johnson & Johnson. Through the collaboration, Optellum will apply its AI-powered clinical decision support platform with the goal of increasing lung cancer survival rates through early intervention and prevention.

Lung cancer is the most common type of cancer and the leading cause of cancer deaths in the world. Approximately 1.8 million people worldwide die from lung cancer each year. The current five-year survival rate is only 20%, primarily due to most patients being diagnosed after the disease has progressed to an advanced stage (Stage III or IV). However, the survival rate for small tumors treated at Stage IA is as high as 90%.

At the core of the collaboration is Optellum’s commercial software, Virtual Nodule Clinic, including an AI-powered digital biomarker based on neural networks and imaging analytics. It identifies and tracks at-risk patients and assigns a Lung Cancer Prediction score to lung nodules: small lesions, frequently detected in chest Computed Tomography (CT) scans that may or may not be cancerous. The Optellum AI will be used to drive accurate early diagnosis and optimal treatment decisions with the aim of treating patients earlier, potentially at a pre-cancerous stage, increasing survival rates.

The Optellum software achieved US Food and Drug Administration (FDA) clearance in March 2021 and is being implemented in clinical care by leading hospitals initially across the United States, with rollouts in select Asia-Pacific and European markets to follow. The software was extensively validated in multi-center studies led by co-authors of clinical guidelines. In the clinical study underpinning the FDA clearance, all pulmonologists and radiologists in the study showed a statistically significant improvement in their diagnostic accuracy and consistency, and made more optimal clinical management decisions.

Optellum’s vision is to redefine the early intervention of lung cancer by enabling every patient to be diagnosed and treated at the earliest possible stage when the chances of cure are highest. In addition to its lung cancer product portfolio, the company is exploring solutions applying the same technology platform to other deadly diseases of the lungs such as interstitial lung disease and COPD.

“This collaboration is a significant milestone for Optellum,” commented Václav Pot?šil, PhD, founder and CEO of Optellum. “It brings us one step closer to Optellum’s vision of redefining early lung cancer treatment by helping every clinician, in every hospital to make the right decisions and provide their patients the best chance to fight back.”

Professor Sam Janes, MD, Head of the Respiratory Research Department at UCL Hospitals, Vice-Chair of the UK National Clinical Reference Group for Lung Cancer and member of the Optellum Medical Advisory Board, commented:

“I believe the next step in lung cancer diagnosis and treatment is seeing the emerging new technologies coming together. AI is key to enabling integration of imaging, clinical, and molecular data—such as liquid biopsies—in order to diagnose disease even earlier. This convergence of technologies has tremendous potential to help physicians prevent, intercept, and ultimately cure patients with early-stage lung cancer.”

Optellum is a commercial-stage lung health company providing artificial intelligence decision support software that assists physicians in early diagnosis and optimal treatment for their patients. The company was founded so that every lung disease patient is diagnosed and treated at the earliest possible stage when chances of cure are highest. Optellum’s roadmap extends beyond lung cancer diagnosis and treatment to other deadly diseases of the lungs, including interstitial lung disease (ILD) and chronic obstructive pulmonary disease (COPD). Optellum is headquartered at the Oxford Centre for Innovation in Oxford, UK and at the Texas Medical Center in Houston, USA.