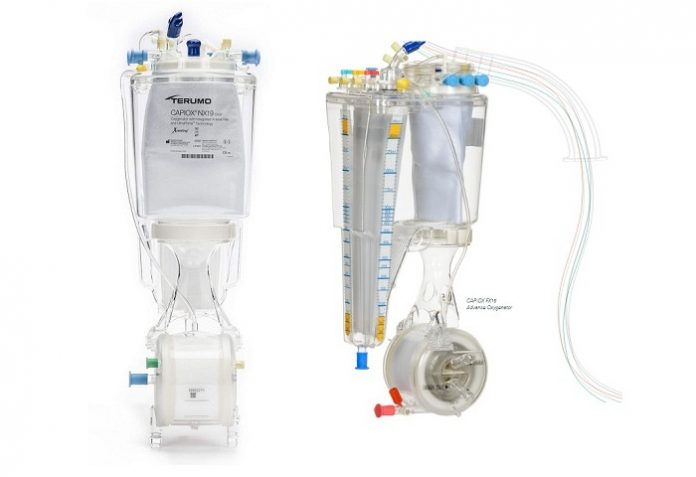 Terumo began sales of the product in the U.S. and Europe, and will expand its sales coverage to Japan and Asia.

“The Capiox NX19 oxygenator is the next step in Terumo’s legacy of oxygenator innovation,” said Robert DeRyke, President and CEO of Terumo Cardiovascular Group. “Terumo introduced the world’s first hollow fiber oxygenator in 1982 and remains at the forefront of the industry, developing high quality products that help save patient lives.”

New UltraPrime technology combines proprietary materials with engineering expertise to deliver a priming volume of just 185 mL and a maximum blood flow of up to 8 L/min. Evidence supports the use of lower prime circuits to reduce hemodilution, leading to fewer blood transfusions and lower risk of acute kidney injury (AKI).1

Terumo Cardiovascular Group manufactures and markets medical devices for cardiac and vascular surgery with an emphasis on cardiopulmonary bypass, intra-operative monitoring and vascular grafting. The company is headquartered in Ann Arbor, Michigan, with manufacturing operations in the U.S., Europe and Asia. It is one of several subsidiaries of Terumo Corporation of Japan that is focused exclusively on cardiac and vascular specialties. For more information, visit www.terumo-cvgroup.com.