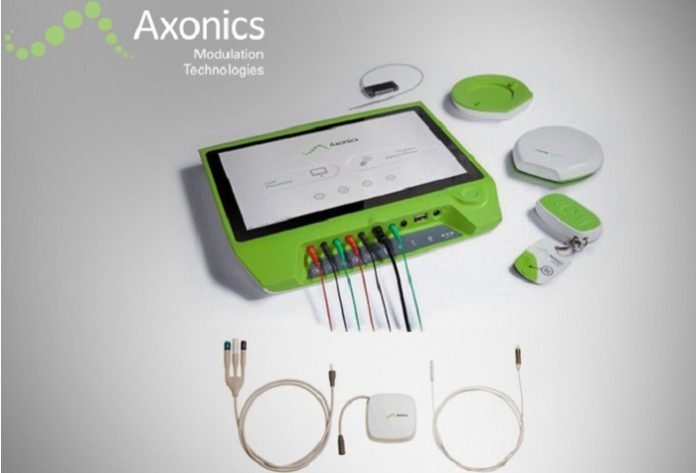 Axonics Modulation Technologies, Inc. , a medical technology company that has developed and is commercializing novel implantable rechargeable sacral neuromodulation devices,  announced the first U.S.-based implantation of the Axonics r-SNM® System subsequent to its clearance by the United States FDA in September. Following the completion of customary post-approval regulatory activities, the first implant outside of a clinical study setting was conducted in California on October 29.

“This first patient was a perfect candidate for the Axonics device,” said Felicia Lane, M.D., Director of Urogynecology, Obstetrics and Gynecology, University of California, Irvine School of Medicine. “Not only did our patient suffer with urinary and bowel dysfunction most of her adult life, her previously implanted SNM device required replacement due to battery depletion in less than four years. Just three short years after her second implant, the device failed due to a fractured lead wire requiring explantation of the entire system. We took this opportunity to implant the long-lived rechargeable system from Axonics which I consider to be state of the art in sacral neuromodulation. At UCI, we pride ourselves in providing our patients with the most effective and reliable treatments, and the Axonics system is a perfect example.”

The Axonics r-SNM System offers a long-lived miniaturized neurostimulator that is approximately the size of a USB stick and is qualified to operate for at least 15 years. Unlike some active implantable devices, the Axonics device can safely be left in place during full-body MRI scans.

The patient, Melissa Der Manouel, said, “The original implant gave me symptom relief and a new lease on life, but having to undergo surgery every few years was physically and emotionally taxing. When I learned about the small rechargeable Axonics device that will work for 15 or more years and is MRI compatible, it was the obvious choice. I’m grateful to have this opportunity to greatly improve my quality of life over the long term.”

Recently, Axonics received FDA approval granting the Company the right to market its product in the United States for the clinical indication of fecal incontinence. Additional conditions are under FDA review, including overactive bladder (urinary urge incontinence and urinary urge frequency) as well as urinary retention.

Karen Noblett, M.D., Chief Medical Officer of Axonics, commented, “We believe that Ms. Der Manouel is a typical patient who, given the choice, will more often than not select Axonics. In corporate announcements, we often talk about scientific and commercial milestones, but ultimately, helping patients like Ms. Der Manouel achieve tangible, long-term improvement in her bladder and bowel condition and quality of life is the most rewarding aspect of our work. We look forward to helping thousands of additional patients in the United States gain the same clinical, emotional and economic benefits that the Axonics r-SNM System provides.”

Sacral neuromodulation therapy has been employed to reduce urinary and bowel dysfunction symptoms and restore pelvic floor function for the past two decades. These conditions are caused by a miscommunication between the bladder and the brain and significantly impacts quality of life. Overactive bladder affects an estimated 87 million adults in the U.S. and Europe. Another estimated 40 million adults are reported to suffer from fecal incontinence/accidental bowel leakage. Reimbursement coverage is well established in the U.S. and Europe. The Axonics r-SNM System is the first rechargeable SNM system approved for sale in the world, and the first to gain full-body MRI conditional labeling.

Axonics, based in Irvine, Calif., has developed and is commercializing novel implantable SNM devices. For more information, visit the Company’s website at www.axonicsmodulation.com.