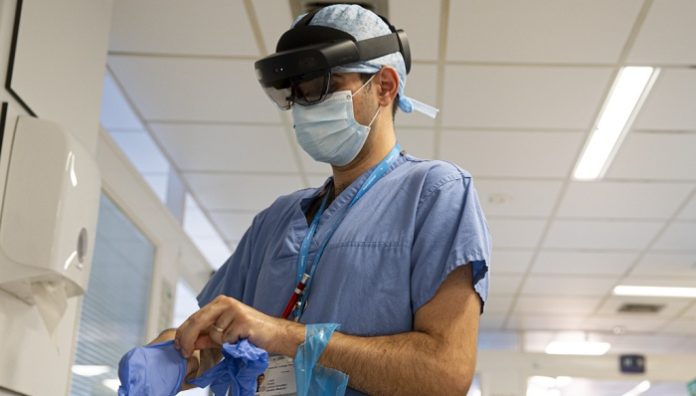 One of the largest NHS trusts in England is using Microsoft HoloLens on its Covid-19 wards to keep doctors safe as they help patients with the virus. Staff at Imperial College Healthcare NHS Trust are wearing the mixed-reality headset as they work on the frontline in the most high-risk area of some of London’s busiest hospitals.

HoloLens with Dynamics 365 Remote Assist uses Microsoft Teams to send a secure live video feed to a computer screen in a nearby room, allowing health care teams to see everything the doctor treating Covid-19 patients can see, while remaining at a safe distance.

Imperial College Healthcare NHS Trust, which includes Charing Cross Hospital, Hammersmith Hospital and St Mary’s Hospital, says using HoloLens has led to a nearly 83% reduction in the amount of time staff are spending in high-risk areas. It is also significantly reducing the amount of personal protective equipment (PPE) being used, as only the doctor wearing the headset must dress in PPE. Early estimates indicate that using HoloLens is saving up to 700 items of PPE per ward, per week.

“In one week, our hospital trust switched from being a place that delivered acute, elective care and planned treatment into a giant intensive care unit,” says James Kinross, a consultant surgeon at Imperial College Healthcare and senior lecturer at Imperial College London, who has been using HoloLens for many years at the hospital. “We weren’t just trying to restructure an entire building, we were trying to redeploy and retrain our staff, while at the same time we had to cope with an ever-growing number of very sick people.”