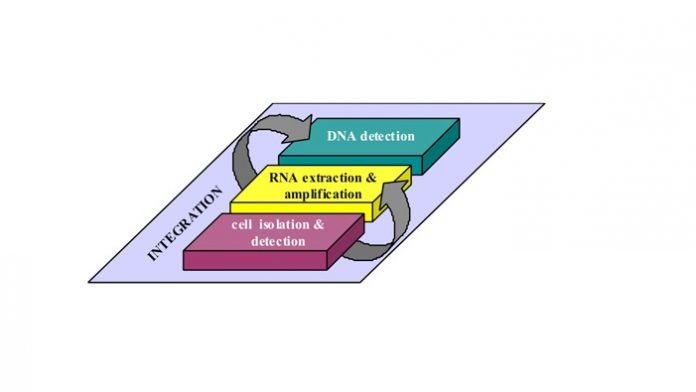 Imagine a medical laboratory performing a genetic test to detect metastasis from blood in a breast cancer patient. Shrink this laboratory down to an area of 1x1cm² and you have a lab-on-chip. The tools in the real-life lab are replaced by microsystems, the medical staff placing the blood sample in subsequent tools, is replaced by microfluidic channels. The huge advantage of such systems is that they enable a fast, easy-to-use, cost-effective test method which can be performed in a doctor’s office or even near the patient’s bed.

Imagine a medical laboratory performing a genetic test to detect metastasis from blood in a breast cancer patient. Shrink this laboratory down to an area of 1x1cm² and you have a lab-on-chip. The tools in the real-life lab are replaced by microsystems, the medical staff placing the blood sample in subsequent tools, is replaced by microfluidic channels. The huge advantage of such systems is that they enable a fast, easy-to-use, cost-effective test method which can be performed in a doctor’s office or even near the patient’s bed.

Unfortunately, there are no real lab-on-chip systems on the market yet. The systems that are commercially available – often wrongfully labeled ‘lab-on-chip’ – only perform one task, for exa mple moving a fluid from one place to another. True lab-on-chips are multifunctional.

Technologies for true multifunctional lab-on-chip systems are being developed by research labs worldwide. One of these labs is situated in the Belgian nanoelectronics research center IMEC. They develop for example microsystems that are able to pick up specific cells in blood samples, to perform cell lysis, to realize amplification and detection of the cell’s genetic material.

Schematic presentation of the different operations to be performed by the lab-on-chip for the isolation and characterization of rare cells.

Circulating tumor cells are tumor cells that invade the bloodstream and cause distant metastases. The levels of CTC detected in metastatic breast cancer patients before and after therapy were shown to be significant predictors of progression and overall survival. The very low levels of CTC in peripheral blood, i.e. down to less than 1 cell per ml, make their detection very challenging.

Module 1: Cell isolation and detection
In a first step, the blood sample is injected into the LOC and mixed with antibody-coated magnetic beads. These beads bind specifically with the tumor cells. Next, a magnetic force is applied, allowing the transport of both the bead-cell complexes and excessive beads. Due to their different magnetophoretic mobility, the bead-cell complexes have a different velocity and can be separated from free beads. Combining such an isolation device with an H-shaped fluidic channel allows to specifically force the beads-cell complexes into the detection channel, where they are counted by flowing them over a spin-valve magnetic sensor.

Figure 2: Cell isolation device bridged between two channels. Cell-bead complexes are moved towards a detection channel, while free beads are flown to the outlet.

Module 2: RNA extraction and amplification
Following isolation and detection, the CTC are lysed and their mRNA is extracted. The genes that are important for the identification of the tumor cells are amplified (cDNA). For this step, MRC Holland has developed kits for the multiplexed amplification of specific breast cancer genes.

The microsystem for cell lysis and mRNA amplification is based on an intelligent design of heating elements, active cooling principles and fluidic channels together with IMM, a german institute specializing in microfluidics.

In the detection module, the amplified cDNA is identified. This can be done using an array of electrochemical or magnetic sensors. With the electrochemical detection (implemented by URV), one can reach a sensitivity in the range of nanomolar, while the magnetic-based detection is currently much more sensitive (picomolar). The magnetic-based detection strategy consists of binding functionalized magnetic beads to the target cDNA and counting these complexes with a magnetic sensor.

Even in the large equipment that is used today to count tumor cells in blood (e.g. Cellsearch), this extra step of DNA detection is not performed. However, it increases the test reliability and provides interesting information for doctors about the subclasses that the tumor cells belong to so that the best therapy can be selected.

Today, the three modules described above are ready and are being tested with spike blood (i.e. blood with a known number of tumor cells). In a next phase, the lab-on-chip modules will be tested with blood from patients, and finally the modules will be integrated on one chip.

Future work will focus on clinical studies using the LOC approach as well as evaluating other application domains for the LOC technology, for example: detecting other sorts of cancer, tracing fetus cells in the blood of the mother (to detect mucoviscidose or other genetic diseases) or assisting in stem cell research.

She is involved in several European and national research projects concerning magnetic and optical materials and devices and their application in the field of biosensing. Liesbet Lagae holds a PhD from the Catholic University of Leuven.