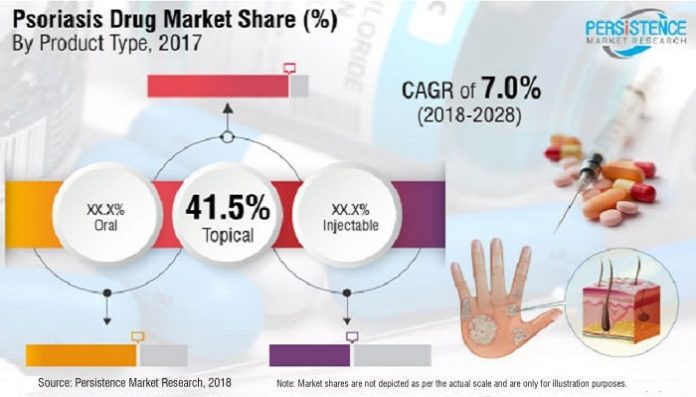 The growth of the psoriasis drugs market is attributed to the growing use of topical corticosteroids products and psoriasis treatment across the globe.

Psoriasis Drugs Market: Analysis
Combination therapeutics and product innovations and are factors expected to drive the need for easy and non-invasive treatment for patients undergoing psoriasis treatment and thus, will lead to greater product penetration in the psoriasis drugs treatment market. In this regard, the National Psoriasis Foundation reported that in 2016, around 1,200 patients in the U.S. opted for new combinational therapies.

Plaque psoriasis is the first most prominent type of segment in the global psoriasis drugs market. Approximately 90% of psoriasis types are chronic plaque psoriasis, which are characterized by red patches covered with a whitish buildup of dead cells, and are well-demarcated, thick, often symmetrically distributed scaly red plaques. Although the plaques can affect any part of the skin, they are majorly found on the surface of the elbows, knees and scalp. According to the WHO, 92% patients with psoriasis suffer from severe scaling of skin, especially found in plaque psoriasis.

Topical psoriasis drugs are applied to the skin in an easy way and are generally the first line of defense in treating psoriasis. Topicals normalize excessive cell reproduction and reduce psoriasis inflammation. Topicals are lotions, creams, gels, ointments and shampoos. Patients with mild psoriasis are able to tackle their skin complaint with topical treatment. Moderate to severe psoriasis mainly needs additional therapy or oral psoriasis drugs.

To support companies in overcoming complex business challenges, we follow a multi-disciplinary approach. At PMR, we unite various data streams from multi-dimensional sources. By deploying real-time data collection, big data, and customer experience analytics, we deliver business intelligence for organizations of all sizes.

Our offerings include pre-built reports that address every major sale, customized solutions to cater to client-specific needs, and consulting services to offer more value addition. Our next-generation research approach for exploring emerging technologies has allowed us to solve the most complex problems of clients. We do not follow a reactive approach, but a pro-active one. Expert analysts at PMR keep a tab on next-generation technologies in their R&D phase and provide the latest insights into these technologies when they are being commercialized. Our ground-breaking approach allows us to deliver market solutions before the technologies reach the market.

Our client success stories feature a range of clients from Fortune 500 companies to fast-growing startups. PMR’s collaborative environment is committed to building industry-specific solutions by transforming data from multiple streams into a strategic asset.