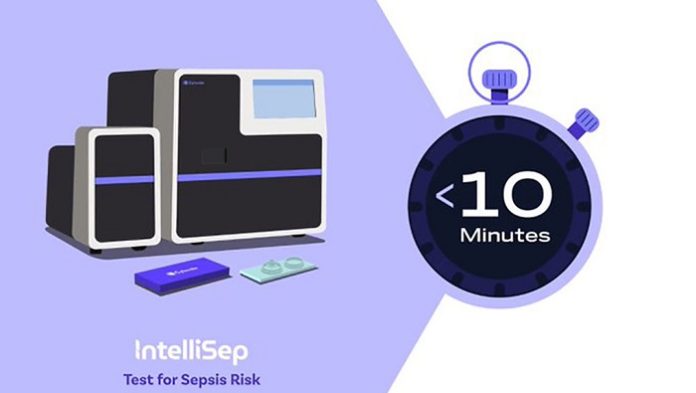 Cytovale®, a medical diagnostics company focused on advancing early detection technologies to diagnose fast-moving and immune-mediated diseases, announced  that its IntelliSep® test has received U.S. Food and Drug Administration (FDA) 510(k) clearance to aid in the early detection of sepsis for the approximately 30 million adult patients with signs and symptoms of infection who present to US emergency departments (ED) each year.

IntelliSep is a groundbreaking diagnostic tool that helps clinicians recognize sepsis and supports critical time-sensitive clinical decisions, providing test results in under 10 minutes. The first in a new class of ED-focused diagnostic tools that assess host response, the test is a simple, fast, and intuitive solution that provides actionable answers directly from a standard blood draw. IntelliSep categorizes patients into three bands according to their probability of sepsis, with Band 1 indicating low probability of sepsis and Band 3 indicating high probability of sepsis. The results may equip providers with a tool to optimize clinical outcomes and empower hospitals to improve resource utilization and achieve operational excellence. IntelliSep may also support hospital efforts to meet guidelines set by the Centers for Medicare & Medicaid Services (CMS) for timely sepsis treatment, known as SEP-1.

Sepsis is the leading cause of death worldwide and is responsible for more than 270,000 deaths every year in the United States—more than opioid overdoses, prostate cancer, and breast cancer combined. 1,2 The condition is the body’s overwhelming life-threatening response to an infection, which triggers a chain reaction and quickly leads to tissue damage, organ failure, and death.1 The risk of death from sepsis increases by as much as 8 percent each hour the condition goes untreated.2 According to the Sepsis Alliance, as many as 80 percent of sepsis deaths could be prevented with rapid diagnosis and treatment—making early detection critical to improving clinical, operational, and financial outcomes.1

“Early detection of sepsis is an invaluable capability for healthcare professionals. Quickly identifying sepsis is critical to saving lives, but until now, we’ve lacked a reliable tool to either recognize the condition or explore alternate diagnoses,” said Hollis O’Neal, MD, Medical Director of Research at Our Lady of the Lake Regional Medical Center, Critical Care Physician at LSU Health Sciences Center, and National Principal Investigator on the multi-center CV-SQuISH-ED study that supported the clearance. “IntelliSep is truly a game changer for sepsis because it provides a unique indicator that gets to the heart of the current sepsis definition, immune dysregulation. The test provides hospital staff with the information needed to identify and treat septic patients efficiently and reduce the financial and health burdens of overtreatment for hospitals and patients.”

The CV-SQuISH-ED study is a multi-center clinical validation study that was completed in early 2022 and is being prepared for publication.3 Data from previously published studies demonstrate the 10-minute test’s potential to aid physicians in rapidly identifying patients at increased risk of sepsis.4

“This clearance is a pivotal step forward in Cytovale’s commitment to early detection technologies to improve health,” said Cytovale co-founder and CEO Ajay Shah. “Every minute is crucial in identifying sepsis, and IntelliSep has the potential to transform clinical approaches to sepsis triage and diagnosis and save countless lives.”

IntelliSep’s innovative technology, which is run on the Cytovale System, assesses the body’s immune response to an infection using immune cell morphology. By applying pressure to tens of thousands of cells and observing their reaction, IntelliSep can provide valuable new insight related to sepsis. The biophysical properties of white blood cells from septic patients demonstrate distinct changes when subjected to pressure; these changes are captured in images and then characterized using a proprietary algorithm to produce a result.