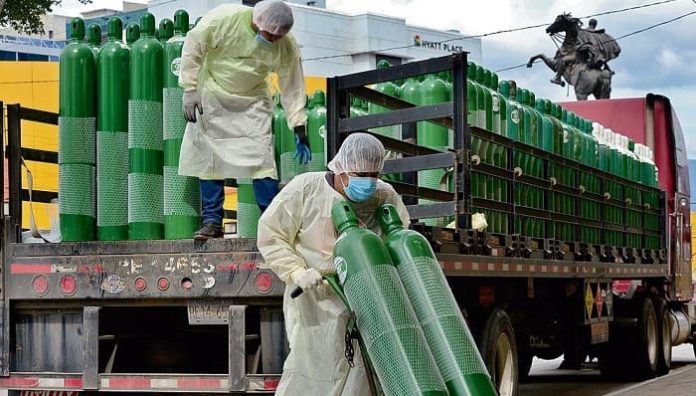 Soaring demand for oxygen prompted by the coronavirus is bringing out a stark global truth: Even the right to breathe depends on money.

In wealthy Europe and North America, hospitals treat oxygen as a fundamental need, much like water or electricity. It is delivered in liquid form by tanker truck and piped directly to the beds of coronavirus patients. Running short is all but unthinkable for a resource that can literally be pulled from the air.

But in poor countries, from Peru to Bangladesh, it is in lethally short supply. Across sub-Saharan Africa, oxygen is a costly challenge for government-funded medical facilities such as Guinea’s Donka public hospital in the capital, Conakry.

The hospital’s planned oxygen plant has never started up. So instead of piping oxygen directly to beds, a secondhand pickup truck carries cylinders over potholed roads from Guinea’s sole source of medical-grade oxygen. Outside the capital, in hospitals and medical centers in remote villages and major towns,doctors say, there is ‘no’ oxygen at all.

“Oxygen is one of the most important interventions, (but) it’s in very short supply,” said Dr Tom Frieden, former director of the CDC and current president and CEO of ‘Resolve to Save Lives’.

In Bangladesh, the lack of a centralised system for the delivery of oxygen to hospitals has led to a flourishing market in the sale of cylinders to homes. In Peru, the president has ordered industrial plants to ramp up production for medical use or buy oxygen from abroad. He allocated about $28 million for oxygen tanks and new plants.

But a massive production increase or an impromptu private marketplace are both out of reach in Guinea, where GDP per capita is $850.

Dr Aboubacar Conté, head of Guinea’s health services, said four hospitals in outlying cities will eventually get their own on-site plants to ease what he acknowledged is a need for oxygen outside the capital. — AP