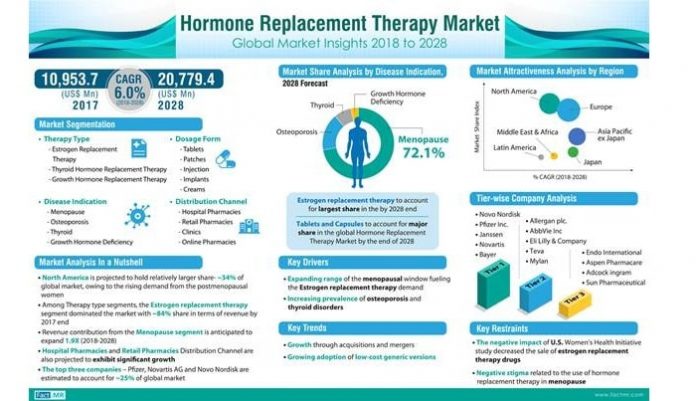 The hormone replacement therapy market is foreseen to expand at a significant pace with sales of products crossing US$ 12,000 Mn by 2019 end. Rising incidences of osteoporosis fractures coupled with growing menopause rates among women have remained instrumental in driving the demand. Fact.MR envisages that the demand is projected to expand at a CAGR of 6% in terms of value throughout the period of forecast, 2018-2028.

Disorders associated with hormonal imbalance continue to influence the use of hormone replacement therapy worldwide. The demand is further pushed with macroeconomic aspects such as growing geriatric population and significant increase in healthcare expenditure worldwide. Growing age directly impacts secretion of hormones such as progesterone and estrogen in women, which is expected to trigger the use of estrogen hormone replacement therapy.

The market is expected to remain influenced by increasing government support apropos to women’s health. Governments and non-profit organizations of various countries are spreading awareness regarding hormone replacement therapy along with providing free treatments to lower and middle class people. Regulatory authorities such as FDA are also contributing to the cause of supporting women’s health by launching initiatives such as Take Time To Care (TTTC) programs. This aspect is likely to support the growth of the market in the coming years.

Stakeholders in the hormone replacement therapy can find attractive opportunities in developed countries in North America, particularly the United States. According to the American Congress of Obstetricians and Gynecologists, around 6,000 women reach menopause every day, reaching a count of over 2 million annually. This has translated into significant adoption in the country. The demand in the US is also accompanied by higher GDP per capita, triggering high healthcare expenditure.

The insights presented here are from a research study on Hormone Replacement Therapy by Fact.MR
https://www.factmr.com/report/2224/hormone-replacement-therapy-market