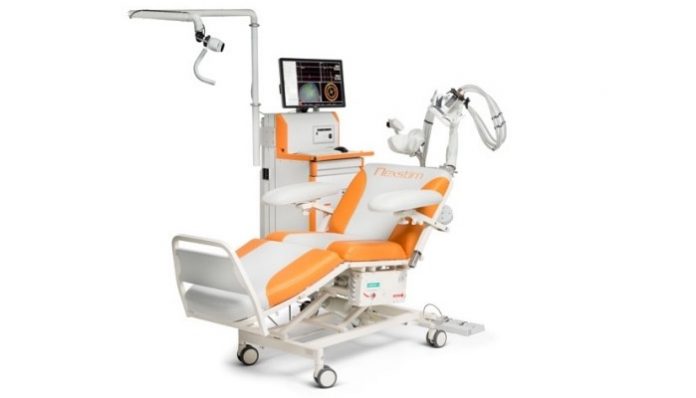 Dr. Frank Zhu, founder and CEO of Ampere Medical, said: “Hong Kong has a population of 7.4 million people and according to the results of the latest Hong Kong Mental Morbidity Survey (HKMMS)*, approximately 2.9% of the population may experience a depressive episode. We are pleased to have become the distributor for Nexstim’s NBT(R) and NBS(R) systems, which are based on a unique transcranial magnetic stimulation (TMS) technology. Nexstim is the only company that provides electric-field navigated TMS, the accuracy of which has already been validated in the most clinically-demanding application (i.e. presurgical brain mapping). Based on our due diligence and experience to-date, we believe Nexstim’s system has great potential for therapeutic and diagnostic applications in Hong Kong and in Macau and in time in Mainland China.”

Ampere Medical Limited has already received its first order for an NBT(R) system which has now been installed in a TMS Centre under the Smile and Face Medical Group in Hong Kong.

Dr. Sam Ng, director of Smile and Face Medical Group, commented: “We are delighted to start treating patients with Nexstim’s navigated TMS therapy in our clinic. In Hong Kong depression is commonly treated with pharmaceuticals – there is, however, significant demand for a non-drug treatment option among patients.”

Dr. Sam Ng continued: “Our decision to adopt Nexstim’s SmartFocus(TM) TMS System was taken after a lot of thought and assessment of other TMS systems. We believe we can deliver better outcomes for our patients using SmartFocus(TM) TMS as its navigation allows us to give personalised, consistent, accurate stimulation to the area of the brain needed to treat depression.”

Nexstim’s SmartFocus(TM) TMS System is highly differentiated from other currently available TMS products due to its unique and highly sophisticated 3D navigation that uses its proprietary E-field algorithm to visualize the exact location, orientation and magnitude of the stimulation.

Nexstim’s NBT(R) system is FDA-cleared for treatment of MDD and is CE marked in Europe for the treatment of major depression and chronic neuropathic pain. In Hong Kong no separate registration process is needed. The system would need to undergo a further regulatory approval process to gain access to the Mainland China market.

Martin Jamieson, Chairman and CEO of Nexstim Plc, said: “We are very happy to partner with Ampere Medical who bring long standing relationships with neuromodulation specialists in Hong Kong. They were very impressed with the unique navigational capability of our NBT(R) and NBS systems, which allows the personalised treatment of each patient. This clearly differentiates our SmartFocus(TM) TMS System from other TMS approaches currently on the market. Ampere Medical’s confidence in Nexstim’s TMS system has already resulted in them fulfilling their first customer order in Hong Kong. We believe the success in Hong Kong could in time provide a stepping stone to us signing further distribution deals to gain access to the Mainland China market as well as other markets in Asia.”

Nexstim is a medical technology company focused on the development and commercialization of its world-leading SmartFocusTM TMS technology, a non-invasive brain stimulation system for the treatment of Major Depressive Disorder (MDD). The Company’s proprietary Navigated Brain Therapy (NBT®) system, a highly sophisticated 3D navigation, is the only personalised, navigated transcranial magnetic stimulation (TMS) approach providing accurate targeting of the TMS to the specific area of the brain associated with MDD.