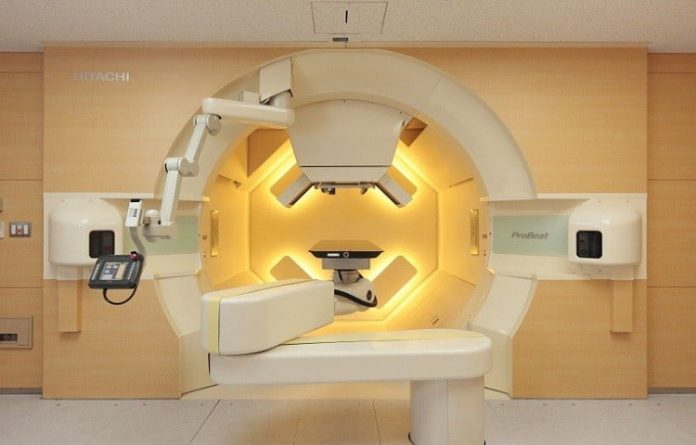 Hitachi, Ltd and Hokkaido University announced that it has obtained U.S. FDA 510(k) clearance on December 26, 2017 for the commercialization of “Real Time Image Gating System for Proton Beam Therapy Systems” (RGPT), allowing for its systems in the United States to treat patients with cutting-edge motion management together with its advanced Spot Scanning irradiation technology.

Proton therapy is a type of radiation used to treat cancer in which protons from a hydrogen atom are extracted and accelerated up to 60％the speed of light. Its energy is concentrated directly on the tumor while avoiding radiation dose to the surrounding healthy tissues. Patients experience no pain during treatment and the procedure has very few side effects compared with that of traditional radiotherapy. In most cases, patients can continue with their normal daily activities while undergoing treatment, thus maintaining their Quality of Life. For these reasons, demand for this type of cutting-edge irradiation therapy continues to grow around the world.

In 2010, a grant under the Funding Program for World-Leading Innovative R&D on Science and Technology (the “FIRST Program”) sponsored by the Japanese government was awarded to the project between Hitachi and Hokkaido University to jointly develop an advanced technology to treat moving targets with proton beam therapy.

By 2014, RGPT and the advanced irradiation technology of Spot Scanning were integrated into Hitachi’s system for the first time. Conventional motion management simply tracks the surface of the patient’s body and irradiates with the proton beam based on a predetermined timing. By tracking the location of gold markers placed near the tumor with X-rays, RGPT is able to irradiate the targeted tumor while in motion and with greater accuracy with a proton beam.

Hitachi received clearance from Japan’s Pharmaceuticals Medical Device Administration for its Proton Beam Therapy system equipped with RGPT (patent no. 05896211) in August 2014. Jointly developed with Hokkaido University Hospital (Dr. Kiyohiro Houkin, Director) and its Clinical Research and Medical Innovation Center (Dr. Norihiro Sato, General Manager), RGPT has been used in approximately 70％of patients treated in the past 3 (approx.) years at the hospital. RGPT has since been highly acclaimed and has been awarded the Imperial Invention Prize of 2017 – an honor bestowed by the Japan Institute of Invention and Innovation for the most outstanding inventions.

Dr. Hiroki Shirato, Director of Hokkaido University Hospital’s Research Group with which Hitachi conducted the joint development, stated, “Hokkaido University has been developing motion tracking technology in the field of X-ray therapy. By combining this technology with Spot Scanning technology, the accurate irradiation of tumors, including those attached to large organs in motion which are difficult to irradiate with X-rays, will be possible and will lead to greater adaptation. I am very pleased that this innovation for highly precise irradiation will become broadly available around the world.”

With this FDA clearance, Hitachi will move forward with plans to install RGPT at facilities under construction in the United States.

Hitachi provides superior proton therapy systems to world-class hospitals in Japan, the United States and around the world. With more than 16,000 patients treated with its systems, Hitachi has earned a reputation for high reliability and achievements. With its cutting-edge R&D, Hitachi will focus on the growing global demand for single room treatment facilities within the expanding market.

Hitachi and Hokkaido University will continue to accelerate innovation in particle therapy in order to contribute to cancer treatment around the world.