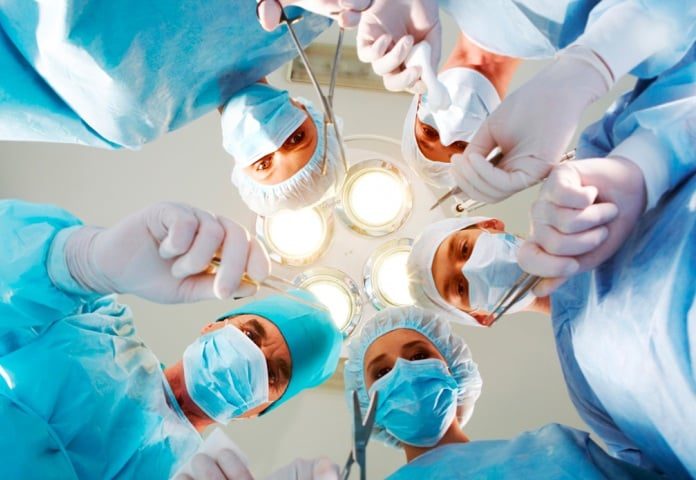 Lose a limb or lose a life – this was the worst-case dilemma confronting Georg M., a 47-year-old man from Stuttgart, Germany. His pelvis had become riddled with a rare, malignant tumor – an osteosarcoma – which threatened to kill him. Conventional surgical procedure would require removal of nearly half his pelvis, which would likely ward off imminent death, but at the same time possibly render it incapable of proper function.

Finding The Best Approach
Faced with the choice of avoiding the grave to end up potentially in a wheelchair, most patients would have to accept this quasi-Faustian bargain. But Georg M.’s doctor instead referred him to the University Clinic of Ulm, a sprawling medical center to the south of Germany, with 1,100 beds, over 5,000 staff, and a world-class department of orthopedic traumatology, hand, plastic, and reconstructive surgery. There, thought the referring physician, lay the patient’s best chance of beating both perils: death or a destroyed pelvis.

And sure enough, everything changed when Georg M. was put in the care of the department’s chief. Dr. Florian Gebhard came forward with a radically different approach to handling the patient’s problem: “I thought we could eliminate the cancer and still keep the patient walking.”
The Operating Room of the Future 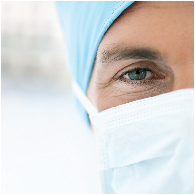 If anyone were to have foresight into complex surgeries, it ought to be Gebhard. The MD and PhD was already famed as a pioneer before he became Department Director in 2007. His specialty: the hybrid operating room (hybrid OR).
Of course it has some features standard to a conventional OR such as surgical and instrument tables, an anesthesia work-station, and ventilation equipment. But it also hybridizes into an imaging center that is used for positioning (and monitoring) during actual surgeries. Even more high-tech is the addition of a navigator – a machine that maps out body internals and surgical kit in three-dimensional detail.
High-Tech Advantages
The brilliance of the positioner-navigator combination is three-fold. First, it allows the positioning of the patient and the operating instruments to be determined within a tolerance of 1 millimeter. Second, it allows any given position to be stored and recalled, as many times as might be required. Third, it executes positioning and re-positioning with the use of infrared light (IR) rather than x-radiation.
Maximized Minimalism 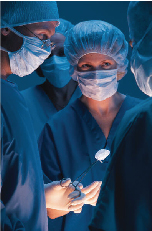 The benefits are all about minimalism. Due to ultra-precise positioning, hybrid ORs offer a high degree of minimal invasiveness. By relying on IR and fluoroscopy when possible, they make the most out of three-dimensional scanning, but with minimal exposure to radiation. Finally, by bringing sophisticated scanning directing to the OR, they minimize the length and the number of procedures required. If, say, a screw were to be placed improperly, this can be detected and corrected immediately, rather than in a post-op scan that would lead to a further session under the knife.
Weighing Costs and Benefits
These kind of medical results come at a cost. Gebhard concedes that hybrid ORs are expensive, but contends that they can well justify their value. First, minimizing duration and numbers of procedures is a direct reduction in hospital operating costs. Second, in complex cases, increased precision in itself can deliver better – thus more valuable – results. Third, as he puts it: “A hybrid OR can be a strong draw in an increasingly competitive market.”
Have Your Cake and Eat it, too

The applications of this cutting edge positioning-navigation duo are numerous. In neurosurgery, it is especially useful in treating cerebral aneurysms and arteriovenous malformations. In complex spinal repairs – for instance, insertion of pedicle screws – the combination system is unparalleled. Facial reconstructions and oral biopsies are another key area of use, along with pelvic surgery and tumor resection – which is precisely the dual challenge faced by Georg M. “It is very useful,” says Gebhard, “when the work has to be very, very precise.”
Right to the Point with Ultra-Precise Surgical Navigation
His solution was elegantly simple. After imaging and positioning ultra-precisely with the navigator, he slotted a single screw to pin together the ilium to the sacrum, thereby reinforcing two of the key ‘ring’ bones in the pelvis. The tapped cylinder added strength to what would ultimately be a weakened pelvic structure.
Then, after prepping with the same set-up tools once again, he carefully carved out the diseased bone from the ilium, right down to the 1-centimeter safety margin prescribed in such cases. Without such an exact set-up, he notes, such a precise cut would not have been possible.
Less Stress for the Patient
The stability of the post-op pelvis would have been too compromised for the patient to walk. Reconstruction of the pelvis would have required additional surgery – perhaps even multiple operations – that would not only have pushed the budget, but have taken many months more to heal, with a considerable risk of afterwards walking with a painful limp or perhaps not walking at all. Instead, Georg M. went from the hybrid OP straight to rehabilitation. After intensive physical therapy, he emerged with full use of his leg.
Next-Level Surgery 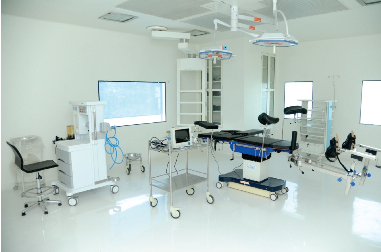 Hybrid OR, with its double team of positioning and navigation, takes surgery to the next level. As Gebhard puts it, “the hybrid OR integrates optimally all steps in a surgery: planning, transmission of planning data to the OR and the navigator, navigation itself, and post-operative documentation – all without leaving the table. This eliminates time-consuming data-transmission steps and avoids possible incompatibility. At the same time, documentation for all the steps and measures taken is completed seamlessly, without requiring even more time.”
For patient Georg M., the value of the hybrid OR is much more personal. It allowed him to beat bone cancer, while keeping both life and limb intact.