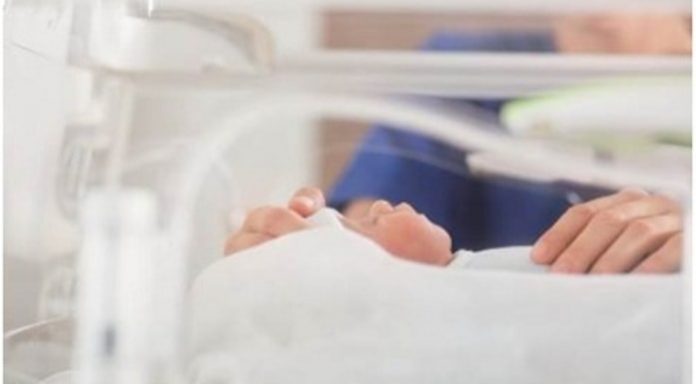 A womb made of Plexiglas

Babies are warm and cozy in the amniotic sac where they can float nearly weightlessly. External stimuli are cushioned, and the tiny body only perceives them slightly. A mother’s womb cannot be replaced. Medical technology has, however, advanced continuously over the last few years. The most important factor is the correct temperature.

Not hot, not cold, not dry: This micro-climate contained in an incubator is fine-tuned to the exact needs of a premature infant. Particularly in the case of very premature infants, the temperature outside of the mother’s womb may only decrease by a maximum of 1° Celsius (274.15 kelvin), while high humidity protects the parchment-like skin from drying out. Shortly after birth, the team of physicians must be prepared for much more than merely artificial respiration and the provision of oxygen. Immediate thermoregulation1  to prevent life-threatening hypothermia is just as important.

Inside the womb, an infant’s temperature, at 37° Celsius (310.15 kelvin), is just above its mother’s body temperature, while the average ambient temperature in a neonatal intensive care unit (NICU) is more than 10 degrees (283.15 kelvin) colder.2 Without equipment and proper measures, a cold shock would be inevitable. Studies have shown that for premature infants the risk of death increases by more than one fifth and the rate of later sepsis by 11 percent for each degree

Celsius of temperature loss directly following birth.3  An infant’s body temperature should be kept above 36.5° Celsius (309.65 kelvin) to prevent hypothermia . It should, however, not be significantly higher than this value to also prevent hyperthermia4, which already sets in at a full degree (Celsius)warmer.5

There is only a fine line between cooling down too much and too much warmth for the tiny body. Only after a premature infant has spent some time in the premature infants ward, a so-called thermoneutral equilibrium canbe achieved for the infant, even in sinking temperatures. Temperature still needs to be monitored continuously and adjusted individually, however, as factors such as maturity, weight, clothing and illness also play a role.6

Vital: A consistent temperature
Achieving a thermoneutral equilibrium is very important, as energy and oxygen requirements are minimal in this phase.7  If the temperature sinks, an infant will need to consume energy to re-establish the equilibrium. This would then cause a higher demand for oxygen. If a premature infant is already experiencing hypothermia, however, its ability to deliver oxygen to tissue is limited. This would result in a vicious circle of less and less oxygen available for temperature regulation. Hypothermia and risk of death are thus closely connected.8

An impaired thermal equilibrium may also affect the vegetative nerve system, which regulates non-voluntary bodily functions (sweat glands, bladder etc.). In a study it was demonstrated that measured temperature deviations in sleeping premature babies had an impact on the control of their vegetative nerve systems.

Normal infant (e.g. born after 38 weeks gestation):
• Normal infants can compensate for a moderate decrease in temperature with the help of shiver-free thermogenesis. The prerequisite for this is a layer of brown fat under the skin which generates heat through the oxidation of fatty acids.
• They are born with thicker skin and a fat layer (white fat tissue in the process of being built up), which decreases heat and fluid loss.
• The ratio of body surface area to mass is ca. 2.7 times higher than that of an adult (Obladen, M.; Maier, R.F./2006).
• The proportion of total body water of a newborn is up to 79 percent (flexikon.doccheck.com).

A protective enclosure
To prevent heat loss immediately after birth, the newborn is first wrapped in an insulating, sealing film.9  The team in the newborn intensive care unit then assesses the clinical condition of the premature infant on a thermal bed. It is critical to quickly stabilize the tiny patient and immediately place it in a protective environment which enables a thermal equilibrium. The incubator is ideal for this task: Its temperature can be fine-tuned to the needs of the infant. The device automatically controls warmth around the clock. A small hat also preventstoo much warmth from escaping through the head.

Both incubators and radiant warmers are used in premature infants wards. Double-walled incubators have proven themselves in long-term therapy. If an infant spends too much time under a radiant heater, it may lose a lot of water. A study showed that per milliliter of fluid lost through the skin, the tiny body needs to consume 560 calories.10  This is energy that the infant needs to properly develop.

How does a premature infant lose warmth?
When premature infants cool down, they lose body heat either through their skin or their airways in different ways: An infant radiates heat from its skin in the form of electromagnetic waves – or absorbs these waves from a heat source in the same way. If an infant touches a cooler object, e.g. an unheated mattress, the warmer molecules in its skin conduct heat to the cooler molecules on the surface of the mattress (conduction). A cool draft or a transfer from a warmer to a cooler environment cause the infant to lose warmth, as the air or moisture warmed up by the infant’s skin transports energy to a different area away from the infant’s body (convection). In low-humidity environments, an infant’s moisture may evaporate through its skin or airways, causing an immediate loss in energy.11

The radiant heater, which is open on all sides, is a good alternative12  during quick examinations or small operations, not least because it gives personnel in the intensive care unit direct access to the small patient. An incubator with active air humidification does, however, have its own advantages, as it minimizes fluid loss and provides better monitoring of the premature infant. Combinations of a radiant heater and an incubator, such as the IncuWarmer Babyleo by Dräger, can now provide the benefits of both therapies combined in one device

Incubators: Sophisticated “climate stations”
Infants need one thing in particular after a premature birth: peace and quiet to stimulate their development. In very small premature infants, organs, such as lungs and the brain, mature very gradually outside of the mother’s womb at first.13  Day-to-day life in the clinic is not so peaceful, however. Small operations, X-rays, weigh-ins and baths interrupt the calm phases. Nurses also need to periodically open the access holes or the walls of the incubator to adjust artificial respiration or administer feeds. Measurements taken during routine procedures showed that approximately one-quarter of the humidity and warmth generated in incubators was lost, causing the body temperature of the infant to sink by one degree (274.15 kelvin) within five minutes.14

Incubators of the newest generation can minimize these climate fluctuations: As opposed to other similar devices, the radiant heater of the BabyleoIncuWarmer, for example, does not only begin to warm up the radiation unit once the cover is already open. It is constantly prepared – even when the incubator is closed and can administer the pre-set warmth to the infant as soon as the cover is opened, which keeps the temperature for both open and closed care stable and prevents a gap of coldness. A study showed that the highest proportion of heat loss in incubators is due to radiation from the infant’s body (33-35 percent).15  In an open device, this effect can be much more acute. This makes it even more critical to be able to provide premature infants with continuous heat radiation. Incubators can also generate a so-called warm air curtain which can reduce heat and humidity loss, even when the access holes are open. A thermal mattress placed beneath the infant also prevents energy loss through conduction.

Heat generation is one of the main functions of a modern incubator. Paradoxically, cooling can also play a therapeutic role if a newborn’s body is not receiving enough oxygen, for example.16  The IncuWarmer by Dräger provides the option of operating the device in cool-down mode by switchingoff its heating sources as needed. Simply place baby on mom’s chest?
Medical technology is not the only way to provide infants with vital warmth. The same can be done naturally as well. As soon as the little patient is stable, direct skin-to-skin contact on its mother’s chest several times per day can positively stimulate an infant’s senses and food intake. The World Health Organization (WHO) strongly recommends close bodily contact for infants with a birth weight below 2,000 g.17  Study results showed that a premature (average: 25 weeks gestation, 702 g) infant’s temperature increased during skin-to-skin contact in comparison to infants without direct contact.18  An increase in body temperature as a result of skin-to-skin contact was also observed in a different study involving older premature infants. Oxygen saturation (among other factors) was also better in the premature infants examined (birth weight below 2,500 g, birth at 33.2+/-3.3 weeks gestation).19  The family is thus a vital part of premature infant care and has become an elementary part of the extended “team” in many premature infants wards.
The Babyleo TN500 is manufactured by Drägerwerk AG & Co. KGaA.
Sources: