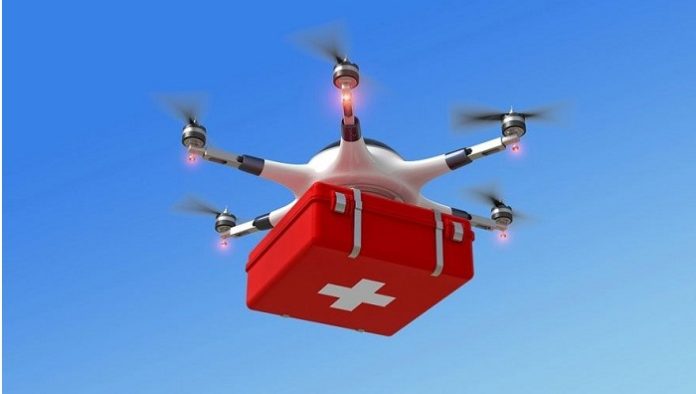 In a situation of a kind, the services of a drone were taken to send a defibrillator to a man who fell while shoveling the snow right outside his home in the city of Trollhattan in Sweden.

The unnamed man told a leading global news broadcaster that it was great that it (drone) arrived in no time. The company which is behind this drone development said, that in this scenario the process of defibrillation began long before the ambulance arrived. Everdrone, in a statement, confirmed that it took not more than three minutes than the alarm getting raised and the delivery being done of the Automated External Defibrillator.

As per the patient, he doesn’t really remember the string of events which took place that day, but all he remembers is getting rid of the snow from his driveway before getting hit by a cardiac arrest, post which he doesn’t know a thing. It was his wife who later told him how fortunate he was. Dr Mustafa Ali, was driving through at that time, and rushed for the patient’s help and also immediately informed Everdrone of the situation. According to Dr Ali, he was on his way to the local hospital and that’s when he witnessed a man collapsing in the driveway. The man had no impression of pulse, and hence the doctor examined a CPR and also asked another person standing there to call up 112. With only a few minutes gone, he could see a drone along with a defibrillator flying over his head.

The chief executive of Everdrone Mats Sallstrom opined that technology played a crucial part in the overall team effort in saving the life of the patient. According to him, there is a need to understand the event chain that saved the man’s life, and the the technology of a drone played a pivotal role in it. The said drone is an outcome of a collaboration between Sweden’s biggest medical university, the Karolinska Institutet, as well as Everdrone and Region Vastra Gotaland.

A couple of years back, this group explored that the drones could be used to send defibrillators across Gothenburg and Kunglav in the western region of the country. In a study that was conducted over a period of four months, the researchers at Karolinska inferred that drones were sent across 12 out of 14 suspected cases of cardiac arrest and seamlessly delivered the AED to all barring one. Interestingly, in 7 cases out of the 12, the drones were at the spot before the ambulance.

Everdrone is already in talks with other countries including the UK, to put forth their technology in those parts.