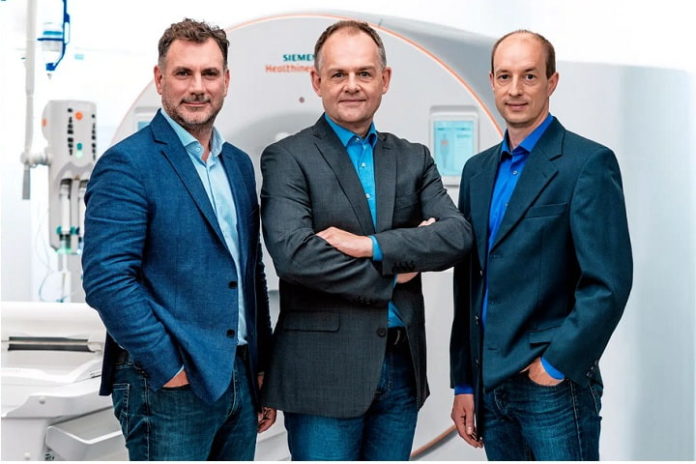 Employees of Siemens Healthineers Professor Thomas Flohr, Dr. Björn Kreisler, and Dr. Stefan Ulzheimer constitute one of the three teams of scientists to be nominated for the German Future Award for their development of the first photon-counting computed tomography (CT) scanner for routine clinical procedures, which is ready for series production. With a novel system concept and pioneering new detector technology, these CT experts have paved the way for a new era in computed tomography, a technology that determines the course of many medical decisions. Thanks to the revolutionary images supplied by photon-counting CTs, more people all over the world will benefit from precise and comprehensive examinations at low radiation and contrast dose – from oncological procedures and heart diagnostics to lung follow-up checks for COVID-19 and other respiratory illnesses. The German Future Award, one of the most esteemed German awards for technology and innovation, will be presented on November 17th, 2021 in Berlin by German Federal President Dr. Frank-Walter Steinmeier.

“Together with the entire team at Siemens Healthineers, I am very pleased to see three of our leading CT experts nominated for the German Future Award. The photon-counting CT system they developed opens up new horizons in medical imaging. Their nomination is a great honor for our entire company and is further proof of our sustained investment in innovation,” says Dr. Bernd Montag, CEO of Siemens Healthineers. In the 2020 fiscal year, Siemens Healthineers invested around €1.35 billion in research and development. The R&D team alone employs a workforce of over 10,000. Siemens Healthineers currently holds the technical intellectual property rights for over 22,000 inventions, including 14,000 patents.

Overcoming the limitations of CT
Computed tomography is an indispensable tool of modern medicine when it comes to fast detection of diseases. Around 12 million CT scans are performed every year in Germany alone.1 Yet for certain diseases, a conventional CT examination will not produce a conclusive diagnosis. Furthermore, some patients are unable to undergo CT scans due to concerns regarding X-ray radiation or iodinated contrast media. The photon-counting CT scanner overcomes all these limitations.

The centerpiece of this innovation is its new photon-counting detector made of cadmium telluride (CdTe), which presents clear advantages over conventional CT detectors. Standard CT detectors first convert the X-rays into visible light that is subsequently detected by a light sensor, ultimately producing the final image. Due to this intermediate step, important information about the energy of the X-rays is lost and no longer available to aid in diagnosis; contrast is reduced, and images lack clarity. The photon-counting CT detector developed by Siemens Healthineers no longer converts the X-rays into visible light. The X-ray photons are converted directly into electrical signals and then counted without information loss. This improves image sharpness and contrast, and the images include more relevant information. Implementing this new technology in a Dual Source CT system – that is, with two X-ray tubes and two detectors – also shortens image acquisition times. Each new image offers physicians more precise information than ever before.

Twice as sharp images at 40 percent less dose enable precise noninvasive examinations for more patients
In all areas of medicine, particularly those involved in evaluating fine structures such as vessels, the lung, or tiny bones, doubling the image sharpness can make diagnosis easier and faster while sparing patients unnecessary uncertainty by delivering clear, conclusive results. This technology makes more efficient use of the energy information collected, resulting in more comprehensive diagnoses. This eliminates the need for multiple additional examinations and ultimately saves on time and costs. One example of this is the CT examination of coronary vessels. Previously, patients with severe calcification or stents had to undergo invasive diagnostic cardiac catheterization. The new CT images now offer reliable visualization of stenoses in coronary vessels – all without the risks of an invasive procedure. Just like with heart examinations, the combination of the excellent image sharpness, new image information, and short acquisition times this new technology provides can be applied to the imaging of other moving organs, such as the lungs. Seeing small structures without motion blurring, enhanced by functional information beyond morphology, has the potential to dramatically improve follow-up checks in cases of COVID-19.

At the same time, radiation or contrast media doses can be reduced by up to 40 percent, thanks to this new technology.2 Now, patients who would have been unable to undergo CT scans in the past can benefit from this fast, noninvasive examination method as well. Thanks to the low radiation doses, it will also be possible to carry out more frequent CT examinations in the future. This would include procedures such as lung cancer screenings, which are already becoming standard of care in many countries around the world.

Novel system concept based on innovative detector material
This progress would not have been possible with conventional CT technology. As early as 2001, the medical technology division of Siemens undertook its first efforts to develop a new detector concept based on cadmium telluride. Over nearly 20 years of development work, the company and its partners adapted this innovative detector material for medical CT applications and prepared it for series production. At the same time, the three nominees and their teams optimized the entire system concept – including hardware, data transfer, and software – to make the most of the advantages offered by the detector. Powerful computers process the immense quantities of data collected by the photon-counting CT scanners to produce three-dimensional images in a matter of seconds.

Several internationally renowned university hospitals in Germany and abroad are currently evaluating one such system that has been approved for clinical use and installed in 20 locations. The systems are still being used with a clear research focus. But the results are very promising. “In the future, every CT will be a photon-counting CT,” underscores Professor Gabriel P. Krestin. The former president of the European Society of Radiology serves as chairman of the Department of Radiology and Nuclear Medicine at Erasmus MC, University Medical Centre Rotterdam, the Netherlands.

In the medium and long term, Siemens Healthineers plans to integrate this new technology in each of its CT systems. With its multi-year lead in innovation and its edge on the market for photon-counting CT systems, Siemens Healthineers, currently the world market leader in the field of computed tomography, is poised to play a dominant role in the growing CT market from its production and development facility in Forchheim, Germany.

Third nomination in five years
Together with their teams, the three nominees played key roles in the development, testing, and series production of the photon-counting CT scanner, thus helping to redefine the field of computed tomography. Professor Thomas Flohr was active in the project from the outset and was a significant driver as long-term head of CT Physics, application predevelopment and clinical collaborations. Dr. Björn Kreisler served as detector physicist and senior key expert for detectors, where he participated in the development and systems integration for the new detector technology. Program Director for counting technology Dr. Stefan Ulzheimer is responsible for transforming the new technology into saleable products with clear clinical applications. These three nominees represent hundreds of employees who contributed to the realization of this unique project.

The German Future Award was christened in 1997 under the auspices of former German Federal President Professor Roman Herzog and has since become a symbol of Germany’s academic standing and commitment to innovation. The key selection criteria for the jury include both the quality of the research as well as the patentability and marketability of the innovation. Employees of Siemens Healthineers were last nominated for the prestigious award in 2017 (for Cinematic Rendering) and in 2019 (for the 7-tesla MRI scanner).

Siemens Healthineers AG is shaping the future of healthcare. As a leading medical technology company headquartered in Erlangen, Germany, Siemens Healthineers enables healthcare providers worldwide through its regional companies to increase value by empowering them on their journey towards expanding precision medicine, transforming care delivery, improving the patient experience, and digitalizing healthcare. Siemens Healthineers is continuously developing its product and service portfolio, with AI-supported applications and digital offerings that play an increasingly important role in the next generation of medical technology. These new applications will enhance the company’s foundation in in-vitro diagnostics, image-guided therapy, in-vivo diagnostics, and innovative cancer care. Siemens Healthineers also provides a range of services and solutions to enhance healthcare providers’ ability to provide high-quality, efficient care to patients. In fiscal 2020, which ended on September 30, 2020, Siemens Healthineers generated revenue of €14.5 billion and adjusted EBIT of €2.2 billion. Following the acquisition of Varian Medical Systems, Inc. the company has approximately 66,000 employees worldwide. Further information is available at www.siemens-healthineers.com.