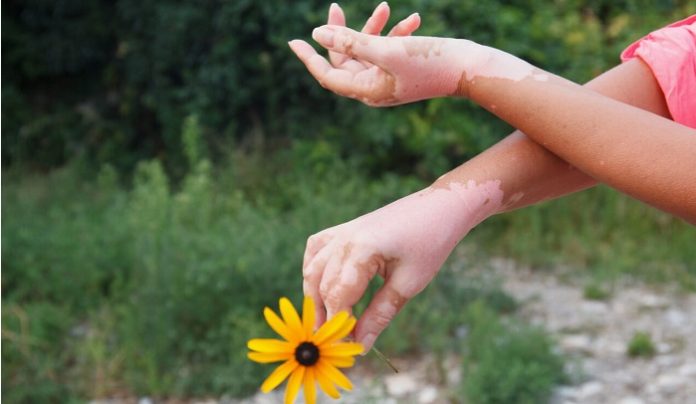 Misconceptions abound about vitiligo, a visible condition that affects the skin. So too do stigma and discrimination. Throughout history, vitiligo has been wrongly associated with leprosy, sexually transmitted infections (STIs), and physical and mental disabilities. Many of these misconceptions are based on little to no understanding about what vitiligo actually is.

Raising awareness and sharing accurate information is one way to help dispel the harmful myths and misunderstandings about vitiligo.

Vitiligo is an autoimmune condition that affects 1 to 2 percent of the global population, meaning millions of people live with vitiligo. Vitiligo causes progressive loss of pigmentation in areas of the skin, mucous membranes, and hair. As a result, vitiligo is characterised by patches of white skin or hair. Vitiligo affects people of all races and ethnicities equally, but due to the level of contrast, these lighter patches are generally more noticeable the darker a person’s complexion is.

Myth #1: You Can Catch Vitiligo By Coming in Contact With a Person Who Has It

Vitiligo is not a contagious disease. While scientists aren’t sure of the exact cause, vitiligo is considered to be an autoimmune disease, with a genetic predisposition and environmental factors (like stress) at play in most cases. An autoimmune disease is one in which the body’s immune system mistakenly attacks its own healthy tissues as if they were invading harmful agents such as viruses or bacteria. In the case of vitiligo, the body attacks the melanin in the skin. Melanin gives the skin its color — the less melanin in the skin, the lighter it is.

Myth #2: You Can Cure Vitiligo and Return the Skin Back to Its Original Color

A cure for vitiligo is not yet known, but various vitiligo treatments exist. These include topical medications, oral medications, ultraviolet (UV) therapy, and surgeries such as skin grafts. Existing therapies satisfactorily manage or slow progressions of vitiligo in approximately 75 percent of people affected by the disorder.

Corticosteroids, in particular, can stop the progression of vitiligo in approximately 4 out of 5 people affected by the condition. Systemic corticosteroids are a potent treatment, however, and their use comes with the risk of possible side effects. For this reason, corticosteroids aren’t widely prescribed to every person with vitiligo. Research is ongoing in an effort to find a cure for vitiligo.

A lot of people ask “Is vitiligo hereditary?” Vitiligo is not solely genetically transmitted, meaning it is not a condition that is inherited from your parents or close family members. Vitiligo is likely caused by a combination of genetic and environmental factors. If vitiligo were purely genetic, identical twins of someone with vitiligo would always also have the condition. However, identical twins both have vitiligo in only 23 percent of cases. That said, up to 20 percent of those living with vitiligo report one or more relatives who also have vitiligo.