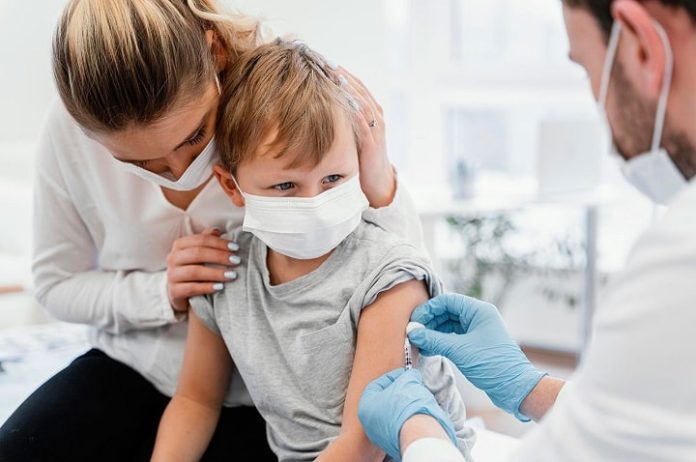 As per the biotech company, none of the children got severe disease as a result of COVID-19, and the bulk of breakout instances remained minor. Moderna’s CEO, Stephane Bancel, said in a statement that the company will request an emergency use licence for the vaccine for children under the age of six as soon as practicable.

According to the firm, the lack of severe sickness, hospitalisation, or death in the study prevented evaluation of efficacy against such outcomes. The vaccine developed by Moderna has been licenced by the FDA for adults aged 18 and older. Moderna has also requested that the FDA approve its vaccine for youngsters aged 6 to 11. The severely modified omicron version has significantly lowered vaccine efficacy from its peak of roughly 94 percent when the doses were first authorised for grownups in December 2020, resulting in a large surge in breakthrough infections. Moderna, on the other hand, claimed that the vaccination’s effectiveness against omicron in children under the age of six was comparable to that of the currently licenced vaccine for individuals aged 18 and up.

According to Moderna, no additional safety concerns have been detected in children under the age of six. As per the firm, no fatalities or instances of myocarditis, pericarditis, or multisystem inflammatory syndrome have been reported. According to the Centers for Disease Control and Prevention, myocarditis and pericarditis are kinds of cardiac inflammation that have been seen at higher rates following the second dosage of Moderna’s and Pfizer’s vaccinations, mainly in younger males.

The detrimental consequences in young children were moderate, according to Moderna, and were more widely cited after the second dose. A temperature of 100 degrees Fahrenheit struck almost 17% of children under the age of two and slightly more than 14% of children aged two to five. Just a few kids in each age group had fevers greater than 104 degrees Fahrenheit.

The information on the youngest kids came from a larger paediatric clinical trial including 11,700 children under the age of 12 in the United States and Canada. The trial comprised 2,500 toddlers under the age of two and 4,200 children aged two to five. The research was done with the help of the National Institutes of Health.

Under 5 is the only age bracket where COVID vaccination is not accessible in the United States. According to the CDC, hospitalizations of children in this age range with COVID were five times higher during the omicron surge in January compared to last year’s delta wave. In response to omicron last month, the FDA tried to speed up the approval of the first 2 doses of Pfizer and BioNTech’s vaccination for children under the age of five, but the approach was delayed since the results did not meet expectations. In April, Pfizer and BioNTech are slated to present results on a third dose for this age range.