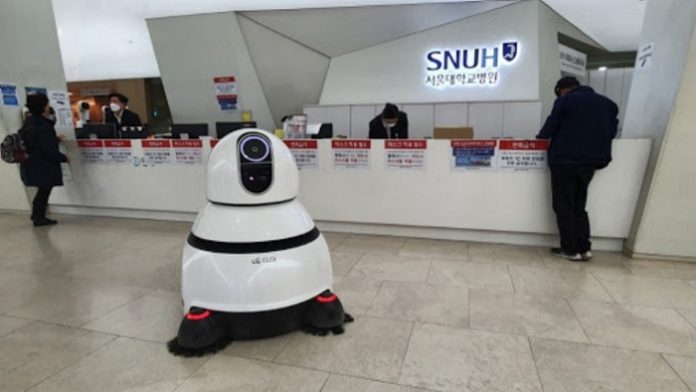 An employee at the Seoul National University Hospital’s Specimen Room used to be busy running around the hospital to deliver samples until early last year. It was always challenging for him to carry the specimen in the hospital corridors full of patients, guardians, and medical staff.

However, the introduction of autonomous delivery robots in April, along with the opening of the Daehan Outpatient Care Center, made specimen delivery easier.

Professor Kwon Hyuk-tae at the SNUH’s Process Innovation Team introduced the hospital’s examples of innovation to become a smart hospital at the “Smart Hospitals, Before and After Covid-19” conference on Tuesday.

The robots carry specimens between the Daehan Center and the blood collection room. They will also transfer drugs requested from the patient wards in the near future.

“We’re using robots to do simple work such as specimen delivery. The robots have drawers. Placing a specimen in it and pushing a button will make the robot reach the destination,” Kwon explained.

If medical staff request a certain drug, a pharmacist has to send the medicine through a complicated moving route, he said. “People used to deliver the medicines to the ward, but now robots can do so on a programmed route.”

The hospital had one problem when using robots for delivery – the slopes within the hospital and the vertical movements between different floors.

“The slope was the problem when expanding the robot delivery. For people, the slope was nothing. But the vertically-long robots could fall even in the slightest hint of a slope,” Kwon said.

Robots carrying drugs have to move between floors, and to do so, they should be able to take the elevator autonomously, he went on to say. To address this issue, the hospital smoothened the slope and made robots call the elevator, take it when the door opens, and had the button pressed automatically, Kwon explained.

He shared several advantages of autonomous delivery robots. He said robots could prevent musculoskeletal disorders of employees because humans can avoid simple and repetitive work. Robots can also minimize contact between patients and hospital staff during the delivery of specimens, drugs, and other items in the contactless era.

Also, robots help the hospital accumulate experience in running a smart hospital and innovations, and they can be a role model for other hospitals to introduce innovative technologies, Kwon said.

He also introduced the SNUH’s “Smart Patient Room” that opened on Oct. 30.

In the smart patient room, an individual patient bed has a smart monitor with various functions. The room also has digital signage at the entrance and a nurse room dashboard.

Using the smart monitor, the patient can check hospitalization schedule, customized health information, schedules for and results of examination, surgery, and education. A screen touch will request a saline replacement, pain relievers, toilet assistance, and various applications for documents.

The smart monitor reduced work for medical staff, too, because they do not have to explain hospitalization and discharge. In rounds, doctors can explain the exam results in front of the patient’s bed, referencing the monitor’s data. Such services upgraded the quality of patient care by one notch, Kwon said.

The computerization of reservations for non-scheduled tests, pushed by the Process Innovation Team since September 2018, has also helped SNUH smarter, he went on to say.

In the past, 45 percent of the laboratory exams on outpatients and 80 percent of all the tests were non-scheduled. Kwon said the hospital had to cancel many tests, received many complaints, and could not manage resources very well.

“Nurses had to write down on papers for non-scheduled tests. If patients lost them, they didn’t know what tests they had to get and where they had to go. That was the real situation at the SNUH,” he said.

To build a mobile application, it was essential to computerize non-scheduled tests. So, the SNUH formed a task force to improve the reservation process and implemented the “Integrated Reservation System.”