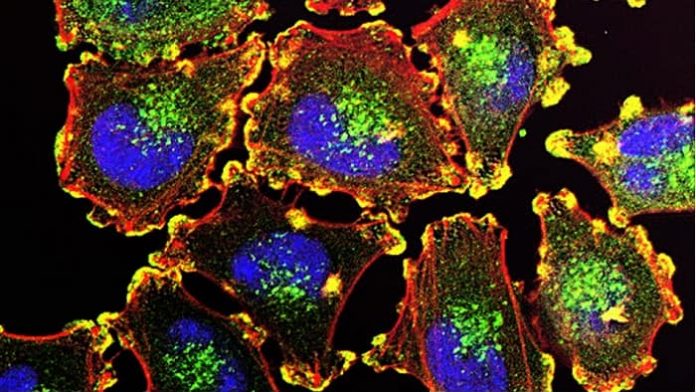 A multi-institutional research team, led by investigators at Massachusetts General Hospital (MGH) and the Broad Institute of MIT and Harvard, has identified specific states of cytotoxic CD8 T cells that are associated with patient response to checkpoint immunotherapy for melanoma.

Their report published in the journal Cell also identifies specific marker proteins associated with these cell states, providing data that could help better understand why checkpoint therapy – which enables the immune system to attack cancerous tumors – doesn’t work for all patients and may enable the development of tests to help predict which patients may be helped by the approach. A companion immunotherapy study, led by a separate research team from the Broad Institute and Dana-Farber Cancer Institute, appears in the same issue of Cell.

“Checkpoint inhibition therapies have completely changed the way patients with metastatic melanoma are being treated clinically today, and since they were first approved in 2011 they have given new hope to patients who otherwise would have very poor prognosis – an average survival of under a year – and few therapeutic options,” says Nir Hacohen, PhD, director of the Center for Cancer Immunology in the MGH Center for Cancer Research, co-director of the Cell Circuits Program at the Broad Institute, and co-senior author of the Cell paper. “But even though melanoma has one of the highest response rates to checkpoint inhibition, with around 40 percent of patients responding to PD-1 checkpoint therapy, most patients will either not respond or will relapse.”

Previous studies of tumor response to PD-1 or other checkpoint inhibitors have focused on tumor-associated factors, including the number of mutations in a tumor, the levels of PD-L1 – the protein that binds to PD-1 – the abundance of CD8 T cells and expression of inflammatory genes detected before or soon after treatment began, but have had limited ability to predict patient outcomes. To identify immune-related factors in the tumor and determine their ability to predict checkpoint responses, the research team – led by Hacohen and co-senior author Gad Getz, PhD, director of the Cancer Genome Computational Analysis group at the Broad and director of Bioinformatics at the MGH Cancer Center – used single-cell RNA sequencing, which measures cell-by-cell the RNA levels of thousands of genes, to get a clearer picture of the immune landscape of patients treated with checkpoint inhibitors.

An analysis of RNA levels in more than 16,000 immune cells from the melanoma tumors of 32 patients treated with checkpoint therapies identified several subsets of cells with distinct gene expression patterns that were more common in tumors that either did or did not respond to therapy. Because CD8 T cells, which are known to be key components of the mechanisms behind checkpoint inhibition, were abundant in melanoma samples, the researchers focused on those cells. Based on patterns of gene expression, they eventually identified two major cell states. One state that was similar to that of stem-cell-like memory CD8 T cells was predominant in tumors that responded to treatment, while the other state, similar to what is seen in dysfunctional or ‘exhausted’ T cells, was more common in unresponsive tumors.

Analysis performed on tumors from a separate group of patients treated with a PD-1 inhibitor found that the transcription factor TCF7, known to be important for the maintenance and differentiation of stem-cell-like memory CD8 T cells, was a marker of responding tumors. Co-lead author Moshe Sade-Feldman, PhD, of the MGH Center for Cancer Research, says, “Importantly we developed a simple staining assay that uses levels of TCF7 in CD8 T cells to discriminate between responding and non-responding tumors. We are currently working together with clinicians and pathologists at MGH to develop a panel of markers based on our study to more accurately identify patients that would respond to immunotherapy. We also found that tumor-infiltrating CD8 T cells that do not express the genes CD39 and TIM3 were positive for TCF7 and play an important role in tumor eradication in response to anti-PD1 therapy in cellular studies.”

Using a mouse model of melanoma, they tested the effects of blocking the action of either one or both of those genes and found that blocking CD39 and TIM3 at the same time reduced tumor size and increased 40-day survival. Combining an inhibitor of CD39 with the approved checkpoint inhibitors PD1 or PD1/CTLA4, tripled the percentage of animals surviving at 40 days post-treatment. The team also identified another transcription factor, BATF, that appears to be a marker for dysfunctional/exhausted CD8 T cell states and highly expressed in non-responding tumors.

Co-lead author Keren Yizhak, PhD, of the Broad Institute, says, “Our results suggest that increasing the ratio of stem-cell-like memory CD8 T cells to exhausted-like cells may help make checkpoint inhibitors and perhaps other immunotherapies more effective. Our methods may be useful in deciphering the mechanisms of human immunity in the context of any therapy, which will hopefully lead to increasingly rational trials based on improved mechanistic understanding and predictive biomarkers.”

Co-senior author Getz, a professor of Pathology at Harvard Medical School (HMS), says, “One of the most important future investigations should be examining the clinical significance of these predictors and cellular states in the context of other malignancies and therapeutic combinations. As checkpoint inhibition becomes the standard of care for tens and thousands of patients worldwide, there is an unmet need to apply the strategy used in this study to other types of cancer to discover the specific mechanisms underlying the success or failure of this type of treatment.”

Hacohen, a professor of Medicine at HMS adds, “This work couldn’t have been done without the close collaboration of the many researchers who contributed expertise in experimental and computational sciences and our amazing clinical partners – including surgeons, oncologists, radiologists and pathologists. We also want to thank the many patients who agreed to support our research by allowing us to study samples of their tumors in order to help future patients with melanoma or other cancers.”

The Broad Institute of MIT and Harvard was launched in 2004 to empower this generation of creative scientists to transform medicine. The Broad Institute seeks to describe all the molecular components of life and their connections; discover the molecular basis of major human diseases; develop effective new approaches to diagnostics and therapeutics; and disseminate discoveries, tools, methods, and data openly to the entire scientific community. Founded by MIT, Harvard, Harvard-affiliated hospitals, and the visionary Los Angeles philanthropists Eli and Edythe L. Broad, the Broad Institute includes faculty, professional staff, and students from throughout the MIT and Harvard biomedical research communities and beyond, with collaborations spanning over a hundred private and public institutions in more than 40 countries worldwide.