Medtronic plc is the first company to receive U.S. FDA approval for its suite of cardiac rhythm and heart failure devices and leads to be scanned in both 3 and 1.5 Tesla (T) magnetic resonance imaging (MRI) machines. This advancement gives patients with Medtronic SureScan® MR-conditional pacemakers, implantable cardioverter-defibrillators (ICDs) and cardiac resynchronization therapy-defibrillators (CRT-Ds) and leads access to MRI scans on any part of the body. 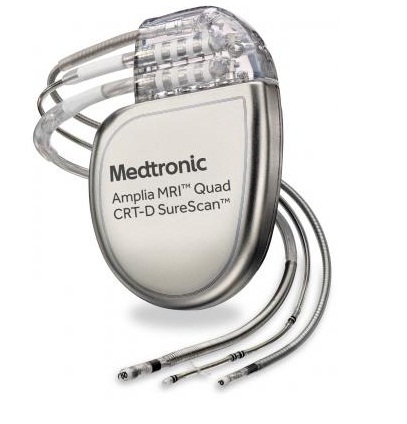 Each year, approximately 12-16 percent of patients with cardiac devices have a condition in which MRI would normally be prescribed, but less than 1 percent receive a scan because of device or lead restrictions.1-4 Before the availability of MR-conditional technology, patients with cardiac devices were contraindicated from undergoing MRI scans to avoid a potential interaction between the MRI and the device function.

“The potential interaction between cardiac devices and MRIs has been a long-running concern for patients and physicians,” said Marc Silver, M.D., cardiologist at WakeMed Heart and Vascular Physicians in Raleigh, N.C. “Fortunately, advancements in MR-conditional cardiac device technology give patients more access to this important diagnostic tool.”

MRI is an important imaging technology to diagnose conditions such as stroke, cancer, Alzheimer’s disease, and muscle, bone and joint pain. 3T MRI offers better image quality5,6, better diagnosis7-11 and reduced scan duration11,12 compared to 1.5T scans. In the next five years, the adoption of 3T MR systems is expected to reach approximately 30-40 percent of hospitals across the U.S.13

“While 1.5T scanners still comprise the majority of installations, 3T scanners are expected to comprise more than half of new units – with some centers having only 3T scanners – since they offer faster scans and higher resolution images,” said Yair Safriel, M.D., neuroradiologist and chief medical officer at Pharmascan Clinical Trials and University of South Florida. “Approval for MRI conditional scanning at both 1.5 and 3T allows patients to have improved access to MRI at a time and place most appropriate for their care. And with 3T scanning, physicians and radiologists gain a clearer look into soft tissues, particularly critical when diagnosing serious conditions, often involving the brain and spine.”

Patients in the U.S. with the following devices are now eligible for 1.5 and 3T MRI scans:

“Our goal is to help patients get the cardiac device therapy they need while ensuring they also retain access to other needed tools, such as diagnostic MRI,” said David Steinhaus, M.D., vice president and general manager of the Heart Failure business, and medical director for the Cardiac Rhythm and Heart Failure division of Medtronic. “We are proud to be the first and only company to offer a comprehensive suite of MR-conditional devices and leads in the U.S.”

About Medtronic
Medtronic plc (www.medtronic.com ), headquartered in Dublin, Ireland, is among the world’s largest medical technology, services and solutions companies – alleviating pain, restoring health and extending life for millions of people around the world. Medtronic employs more than 88,000 people worldwide, serving physicians, hospitals and patients in approximately 160 countries. The company is focused on collaborating with stakeholders around the world to take healthcare Further, Together.

The Revo MRI(TM) Pacemaker is labeled for 1.5T MRI only.