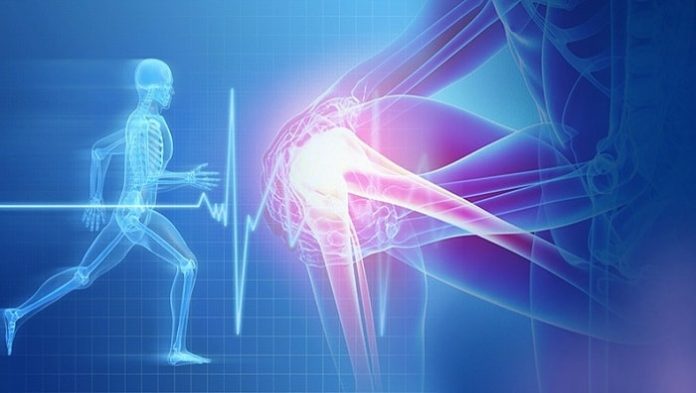 At the 2018 Annual Meeting of the American Academy of Orthopaedic Surgeons (AAOS), four scientists who have made significant contributions to orthopaedic research were honored by the Kappa Delta Foundation and the Orthopaedic Research and Education Foundation (OREF).

The Kappa Delta Awards recognize scientists whose research in musculoskeletal disease or injury have led to advancement in patient treatment and care. This year’s award winners have made a major impact to research in the areas of tendon healing and remodeling, the use of adult stem cells for musculoskeletal tissue repair, joint degeneration and anterior cruciate ligament reconstruction.

Promoting effective tendon healing and remodeling
Nelly Andarawis-Puri, PhD, was presented with the 2018 Kappa Delta Young Investigator Award for her research in tendon disease or injury and the healing response. Dr. Andarawis-Puri is a Clare Boothe Luce assistant professor at Cornell University, Nancy and Peter Meinig Family Investigator in the Life Sciences department and adjunct assistant scientist at the Hospital for Special Surgery in New York. Evan Flatow, MD, Lasker professor of orthopaedic surgery and president of Mount Sinai West in New York, co-authored the research.

Tendon injuries, disease and tears are very common, but understanding how tendons rupture is largely unknown, leading to limited healing and the inability to restore tendons back to a normal state.i Small tendon tears often form into larger, less manageable tears,ii,iii resulting in poor outcomes. Dr. Andarawis-Puri’s multidisciplinary research used animal models to investigate the mechanisms of damage accumulation that lead to a tendon injury and the mechanisms that cause effective scarless tendon healing.

“The structure of the tendon has everything to do with the capacity to function,” said Dr. Andarawis-Puri. “The overall failure rate in tendon repair is high because patients heal with scaring which doesn’t have mechanical integrity. No matter how far we advance in surgical techniques, if we’re working with scar tissue it will always haunt us. However, if we can modify the structure or recreate an environment for the cell that is needed for remodeling, then we can produce better outcomes.”

Dr. Andarawis-Puri and her team developed a model to understand how damage accumulates and leads to tendon injuries, and to replicate scarless tendon healing after onset of rupture. The research found that damage begins to accumulate even from just one instance of sub-rupture fatigue loading, which was unexpected. Applying one bout of moderate-level fatigue loading–comparable to one intense bout of exercise by a middle-aged, untrained individual–led to tendon fatigue that didn’t recover until at least six weeks out, increasing the risk of tendon rupture. Dr. Andarawis-Puri emphasized that, as we still haven’t figured out how tendons heal without forming scar, more research needs to be conducted.

A previous Kappa Delta Young Investigator Award winner, Dr. Huard is a distinguished professor, vice chair for research, Department of Orthopedic Surgery at McGovern Medical School at The University of Texas Health Science Center at Houston (UTHealth), director of the Center for Tissue Engineering and Aging Research at the Brown Foundation Institute for Molecular Medicine, and the chief scientific officer and director of the Center for Regenerative Sports Medicine, Steadman Philippon Research Institute in Vail, Colorado. His research over the past 25 years has focused on gene and cell therapy in the treatment of musculoskeletal injuries and diseases.

“Winning this award means that what my team and I are doing is important in the orthopaedic field and has value,” said Dr. Huard. “Dr. Freddie H Fu and Dr. Morey Moreland, who passed away in 2011, took me under their wings when I went to the University of Pittsburgh. They created a collaborative environment between scientists and clinicians, which has been key in my research and moving it into the clinical arena.”

In the mid-1990s, Dr. Huard and his research team worked on muscle cell transplantation for Duchenne muscular dystrophy (DMD), in particular the transplantation of normal myoblasts (differentiated muscle progenitors that become muscle fiber cells) into muscles that lacked dystrophin. Dystrophin is a protein that is located in muscles used for movement and in the heart muscle.

Ninety-nine percent of the cells weren’t surviving the implantation, so his team began to investigate the one percent of cells that survived post-implantation. The cells that survived post-implantation also displayed stem cell characteristics and were termed muscle-derived stem cells (MDSCs). MDSCs have been studied to improve the healing of numerous tissue types, including bone, articular cartilage, peripheral nerves and ligaments, and are currently being utilized in two clinical trials for stress urinary incontinence (phase II clinical trial) and myocardial infarction (phase I clinical trial).

Based on this initial research, Dr. Huard and collaborators have begun to explore the origin of these cells and show they come from blood vessel walls. His research has also shown that promoting angiogenesis and the implication of blood vessel-derived cells in various tissue repair such as the anterior cruciate ligament (ACL) and meniscal repair. While current ACL reconstruction methods are successful, recent studies have shown that normal knee structure and function are fully restored only 37 percent of the time.vi As some of the musculoskeletal tissues have limited healing capacity, Dr. Huard believes that the use of adult stem cells may accelerate the healing process and reduce recovery time after injuries, diseases and aging.

“We are trying to give orthopaedic surgeons new technology to allow patients to heal faster and better through the use of adult stem cells,” said Dr. Huard. “If we inject stem cells into the joint fluid, we can decrease ACL recovery time by one month. Stem cell delivery wrapped around the tendon graft heals even faster than when stem cells are injected into the joint fluid.”

Understanding the link between hip pistol grip and joint degeneration
Paul E. Beaulé, MD, FRCSC, professor and head of the Division of Orthopaedic Surgery in the Department of Surgery at The Ottawa Hospital and the University of Ottawa, received the 2018 Kappa Delta Elizabeth Winston Lanier Award for his research identifying the origins of the hip pistol grip/CAM deformity and how it can lead to joint degeneration. The research was co-authored by George Grammatopoulos, MD, FRCS, PhD; Andrew Speirs, PhD; Geoffrey Ng, PhD; Gerd Melkus, PhD; Sasha Carsen, MD; Hanspeter Frei, PhD; Kawan Rakhra, MD; and Mario Lamontagne, PhD. Drs Speirs and Frei work at Carleton University and Dr Carsen at the Children’s Hospital of Eastern Ontario.

More than 28 million people in the United States are estimated to have osteoarthritisvii and the hip is second most commonly affected area.viii Osteoarthritis of the hip causes pain and stiffness, can make everyday activities difficult, and often leads to a total joint replacement which number have grown exponentially in the last five to ten years with over 50,000 annually in Canada and over 300,000 annually in the US.viii While early hip joint degeneration is common and pre-existing abnormal joint morphology is a risk factor, there was only an observed association between cam morphology (pistol grip deformity) and hip osteoarthritis, and inconsistent evidence to suggest causation. Cam morphology, or pistol grip deformity, is when the “ball” of hip joint has an abnormal shape. When seen on an X-ray, the joint has a pistol grip shape, hence the name. Through the years it was also referred as the tilt deformity and more recently as the cam deformity by Reinhold Ganz.

Through an extensive and coordinated multidisciplinary effort spanning over a decade, Dr. Beaulé and his team set to determine whether the cam morphology was a cause of premature cartilage degeneration as well as gaining better insights into how the bone supporting the cartilage might play a role. Their body of work looked at several cohorts of patients, including teenagers, to determine how the cam deformity might develop looking at the influence of sporting activity, as well what anatomical factors were associated with pain and how the deformity evolved in patients who were diagnosed in early adulthood. Setting the data against Hill’s criteria (strength, specificity, temporality, plausibility, biological gradient, experiment, consistency, coherence and analogy of findings), the researchers deducted that cam morphology is a cause of early hip osteoarthritis.

“Winning the Kappa Delta award is a tremendous honor,” said Dr. Beaulé. “It shows the huge benefits and potential of collaboration with basic science researchers and other clinicians, spanning biomechanics, kinematics and medical imaging. This research is helping the development of a risk profile so that we can one day provide individuals with both surgical and physical therapy programs to avoid worsening of hip pain and loss of motion and keep their hip healthy.”

They team not only confirmed that the cam deformity forms during skeletal maturation but that other factors such as spino-pelvic motion as well as size and location of the deformity were key determinants who is at risk of articular damage. More importantly, surgical correction of the deformity not only provided pain relief to patients but also relieved bone and cartilage loading. While not all patients with a cam morphology will develop joint degeneration, the team was able to characterize static and dynamic contributing factors.

“One of the next phases of our research is to better understand what types of activities are at higher risk of developing the cam morphology,” said Dr. Beaulé. “We also need to look at exercise programs that truly affect how the hip moves and how it may affect the arthritic process. Lastly, we need to develop the biomarkers, so we can have early detection before arthritic hip pain and cartilage damage begin, and intervene sooner.”

The research was co-authored by Tadashi T. Funahashi, MD, chief innovations and transformation officer at Kaiser Permanente and clinical professor of orthopaedic surgery at the University of California at Irvine, College of Medicine; Elizabeth W. Paxton, MA, director of the Kaiser Permanente National Implant Registries; and Maria C. S. Inacio, PhD, consulting epidemiologist at Kaiser Permanente, Surgical Outcomes and Analysis Department, SCPMG Clinical Analysis, and senior epidemiology research fellow at the University of South Australia.
Anterior cruciate ligament (ACL) reconstruction has increased since 1994, with a more significant increase in females and adolescents.ix,x Although ACL reconstruction outcomes are successful, several studies have found that athletes weren’t able to return to sports at their previous level.

“We’ve been able to show that by collecting and analyzing the data, determining the different outcomes–both poor and good outcomes–and providing that information back to the surgeons, they have been able to make changes in their practice and show improvements in patient outcomes,” said Dr. Maletis. “One of the main findings was that certain grafts have higher and lower risks of revision. For instance, there are certain types of allografts that don’t perform as well, typically the more highly irradiated and chemically processed grafts.”

As a result of the collective body of evidence, a risk calculator was developed to help predict the probability of graft survival based on specific patient characteristics, including age, type of sport, BMI and graft type. The risk calculator is now publicly available.

The sorority has since added two more awards and increased the award amounts to $20,000 each. Two awards are named for the sorority national past presidents who were instrumental in the creation of the awards: Elizabeth Winston Lanier, and Ann Doner Vaughn. The third is known as the Young Investigator Award.

About the AAOS
With more than 38,000 members, the American Academy of Orthopaedic Surgeons is the world’s largest medical association of musculoskeletal specialists. The AAOS provides educational programs for orthopaedic surgeons and allied health professionals, champions and advances the highest quality musculoskeletal care for patients, and is the authoritative source of information on bone and joint conditions, treatments and related issues.