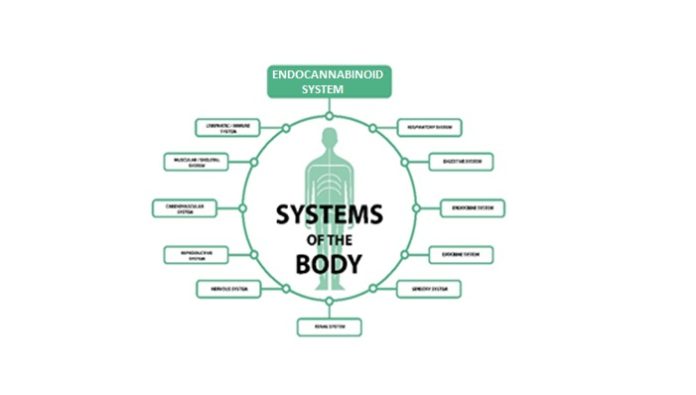 A major failing of the discourse surrounding cannabis (and other drugs, for that matter) is the lack of understanding of how the drug affects the human body and mind — not in listing the drug’s effects, but in the mechanisms through which the drug produces its effects. How can we say definitively that cannabis is safe or dangerous if we don’t know precisely what the drug is doing after it reaches the blood stream?

Fortunately, we know more about how cannabis acts on the human body than ever before, and thanks to increased funding as a result of legalization efforts, we are discovering more about cannabis’s short- and long-term effects than ever before. Here’s an explanation of the main system associated with cannabis use, the endogenous cannabinoid system (ECS), to include what it does and how cannabis affects it.

One of the Oldest Animal Systems

Despite only being discovered by researchers in the early 1990s, the endocannabinoid system seems to have been present in the earliest of our animal ancestors. The evidence for this is that all animals — both vertebrates like mammals, birds, reptiles and fish as well as invertebrates like leeches, mussels, nematodes and more — have endocannabinoid systems within them.

This is because the ECS isn’t only used to receive cannabinoids. The first animal lifeform on Earth was not rolling and lighting marijuana joints. Rather, the ubiquitous presence of the ECS in the animal kingdom demonstrates that it has a critical function in maintaining animal life, and cannabinoids seem to interact or interfere with that function in interesting (and fun) ways.

One of the Most Critical Systems in the Body

In truth, more research is warranted to better understand every responsibility of the ECS, but the most substantial goal of the system is to ensure homeostasis. The human body is subject to a constantly shifting environment — just outside the skin, the world is changing temperature, light and humidity; there are evolving threats to safety, like animal predators and varied terrain; there is irregular access to food and water.  However, inside the skin, human organs and cells can only operate in a strict set of conditions. For example, if internal body temperature strays too far from 98.6 degrees Fahrenheit for too long, systems start shutting down and the person is likely to perish. Thus, the body must maintain internal balance despite the ever-changing environment — and this is homeostasis.

To monitor and manage homeostasis, the ECS is connected to almost every other system within the body, to include the nervous system, the digestive system, the reproductive system, the immune system and more. People can thank their ECS for creating long-term memories, feeling sleepy, enjoying exercise, deploying immune responses and more — though the ECS is also responsible for the experience of pain, hunger and stress.

The ECS utilizes compounds that it creates, called endocannabinoids, to send messages to these systems to encourage important changes for health and wellness, and the ECS can also produce and engage with neurotransmitters, which communicate messages to and from the brain. Both endocannabinoids and neurotransmitters connect with the ECS through two different kinds of receptors, called CB1 and CB2, which are located in various places around the human body.

One of the Easiest Systems to Manipulate

Endocannabinoid receptors are also where cannabis inspires its effects — and they are also where rages the main debate of THC vs. CBD. Tetrahydrocannabinol (THC) and cannabidiol (CBD) are the two most plentiful cannabinoids, or unique compounds, within psychoactive cannabis strains. Not long ago, researchers believed that THC binds primarily to CB1 receptors in the brain and digestive system whereas CBD binds to CB2 receptors in the muscles. Unfortunately, it isn’t that easy. 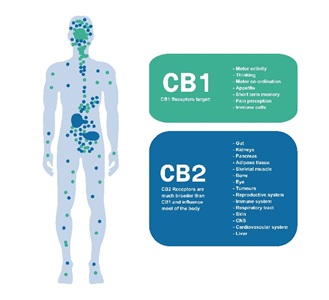 Indeed, once THC enters the bloodstream, it does bind with CB1 receptors. THC looks remarkably similar to an endocannabinoid produced by the ECS, called anandamide, and thus THC can easily bind to receptors and generate effects. The main difference between THC and anandamide is that there is much, much more THC in a marijuana user’s system than there ever is of any endocannabinoid. As a result, THC causes the ECS to malfunction, causing the body to deviate from homeostasis in specific ways. For example, a loss of memory is commonly associated with high-THC strains, as is a stimulated appetite. If the ECS is too overwhelmed by THC, a user might begin to experience negative effects, like a racing heart, low blood pressure and panic.

In contrast, it seems that CBD doesn’t bind to ECS receptors at all. In truth, researchers aren’t confident they fully understand what CBD does once it enters the bloodstream, but many anecdotal effects of the compound, like pain relief and muscle relaxation, have been shown to be verifiable in several studies. Today, most researchers believe that CBD acts like a neurotransmitter, encouraging the ECS to release certain endocannabinoids and more adeptly manage homeostasis.

Again, more research is needed to fully understand how the ECS works and why cannabis has its effects. Fortunately, as the cannabis industry grows, more funding will be available for such study — and we could soon unlock further insights into the ECS.