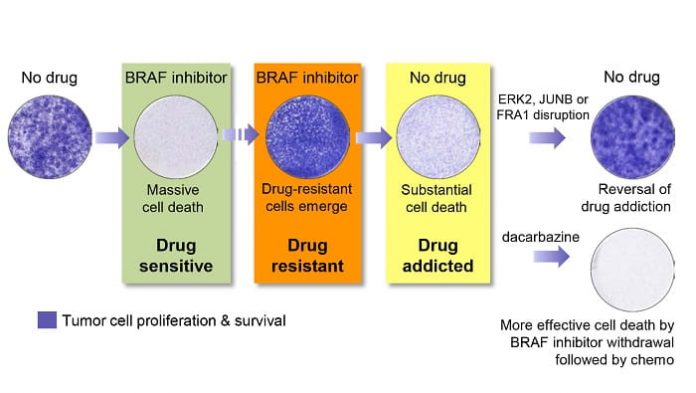 Cancer cells can become not only resistant but also addicted to the drugs that serve to kill them. A research team led by professor Daniel Peeper from the Netherlands Cancer Institute has now discovered the underlying mechanism, which may guide the development of more rational alternating therapies. They publish their findings in Nature on October 4th.

Cancers often become resistant to therapy, which is one of the major challenges in patient care. Sometimes however, cancers are not only resistant but also addicted to the very drugs that were supposed to eliminate them. Indeed, studies in patients, animal models and cultured cells have suggested that this dependency can be used against tumors: it turns out that drug-addicted cells massively die when treatment is suddenly stopped. Although this is a potential new avenue to fight cancer, it was not clear how best to exploit this vulnerability in the clinic, because the mechanism of addiction was unknown. Until now.

Breaking addiction
To reveal the mechanism of cancer drug addiction, it is probably best to try to break it, argued group leader Daniel Peeper and his postdoc Xiangjun Kong at the Netherlands Cancer Institute. They started off with melanoma cells that were both resistant and addicted to a treatment based on inhibition of BRAF, a common driver of malignancy.

With a popular technique called CRISPR-Cas9 they knocked out all individual genes in the cancer cells’ genome, one by one. Then, they searched for cells carrying a mutation that had broken the addiction. Those were the cells that had managed to survive when treatment was discontinued. All others died. With this strategy, the researchers identified a signaling pathway vital for drug addiction, involving the proteins ERK2, JUNB, and FRA1. Peeper:

“Interestingly, all resistant tumor cells we examined used this same drug addiction mechanism irrespective of how they had become resistant.”

“When this pathway is disrupted, cancer cells overcome their drug addiction”, continues Peeper (see illustration). “We have demonstrated this in both cell culture and tumor-bearing mice, and we have indications of the same phenomenon in patients with drug-resistant melanoma. This mechanism was active also in lung cancer cells that were addicted to another drug. This suggests that the pathway we uncovered may be important for various cancer types and treatments.”

Rational alternating treatments
Unfortunately, cancer cells are very flexible and can often reverse their addiction themselves. The new findings may be used to target those addicted cancer cells that fail to die upon stopping the treatment. “Instead of giving addicted cells a break we should probably immediately switch to another treatment”, says Peeper. “Now that we understand how cancer cells can overcome their drug addiction, we have a solid basis for identifying the most effective second treatment for this so-called alternating therapy approach.”

His team already started off with melanoma cells that were addicted to a BRAF-inhibitor. They stopped this treatment and subsequently treated the cells with the chemotherapeutic dacarbazine. This combination of sudden drug withdrawal and a different second treatment turned out to be more effective than just discontinuing the first treatment. Peeper:

This was a proof-of-principle experiment in cultured cells demonstrating how effective these alternating treatments may be. It sets the stage for systematic studies identifying which treatments cooperate best with drug withdrawal for therapy-addicted cancers.

This work was financially supported by the Dutch Cancer Society and the European Research Council.

About the Netherlands Cancer Institute
The Netherlands Cancer Institute is at the international forefront of cancer care and research for already more than a century. The unique combination of health care and scientific research within the same institute offers great benefit for cancer patients. Specialized cancer care professionals work together in multidisciplinary teams every day to set up and carry out treatment plans tailored to the needs of individual patients because no two tumors are alike. Cancer patients or people suspected of having cancer can come to our hospital, known as the Antoni van Leeuwenhoek, to make use of this personal approach and the state-of-the-art research and treatment facilities.

The research institute employs more than 600 scientists investigating many aspects of cancer development, diagnosis, treatment and epidemiology. Scientists at the Netherlands Cancer Institute have excess to state-of-the-art research facilities supporting their basic, translational and clinical research. This scientific research could not be carried out without the institutional support of the Dutch Cancer Society, the Ministry of Health, Welfare and Sport, the many research grants obtained by our researchers from (inter)national funding agencies, and the generous donations made by individuals that support our research program. The Netherlands Cancer Institute is the only OECI designated Comprehensive Cancer Center in the Netherlands. For more information please visit our websites www.nki.nl and www.avl.nl.