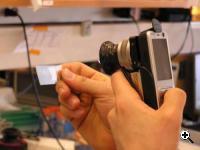 Camera phone can capture far more than photos of people or pets at play.

Now the cell phones can play a vital role in annotated, organized, and transition of images to medical experts at major medical centers for analysis and recommendation as the images can be captured by health workers on a cell phone equipped microscope.

“The same regions of the world that lack access to adequate health facilities are, paradoxically, well-served by mobile phone networks, W e can take advantage of these mobile networks to bring low-cost, easy-to-use lab equipment out to more remote settings.” said Dan Fletcher, UC Berkeley associate professor of bioengineering and head of the research team developing the CellScope.Researchers at the University of California, Berkeley, have developed a cell phone microscope, or CellScope “pototype camera-phone mounted with a microscope” that can “magnify and photograph blood or saliva samples” for diagnosing diseases thus proving that a camera phone can capture far more than photos of people or pets at play. This can not only take color images of malaria parasites, but of tuberculosis bacteria labeled with fluorescent markers.

As per the BBC reports (7/22) – The CellScope can function as a fluorescent microscope by using “cheap commercial light-emitting diodes as the light source – in place of the high-power, gas-filled lamps used in laboratory versions of the device, and cheap optical filters to isolate the light coming from the fluorescent tags,”

The engineers attached compact microscope lenses to a holder fitted to a cell phone. Using samples of infected blood and sputum, the researchers were able to use the camera phone to capture bright field images of Plasmodium falciparum, the parasite that causes malaria in humans, and sickle-shaped red blood cells. They were also able to take fluorescent images of Mycobacterium tuberculosis, the bacterial culprit that causes TB in humans. Moreover, the researchers showed that the TB bacteria could be automatically counted using image analysis software.

The researchers used filters to block out background light and to restrict the light source, a simple light-emitting diode (LED), to the 460 nanometer wavelength necessary to excite the green fluorescent dye in the TB-infected blood. Using an off-the-shelf phone with a 3.2 megapixel camera, they were able to achieve a spatial resolution of 1.2 micrometers. In comparison, a human red blood cell is about 7 micrometers in diameter.

“A CellScope device with fluorescence could potentially be used by patients undergoing chemotherapy who need to get regular blood counts,” said Fletcher. “The patient could transmit from home the image or analyzed data to a health care professional, reducing the number of clinic visits necessary.”

The CellScope developers have even been approached by experts in agriculture interested in using it to help diagnose diseases in crops. Instead of sending in a leaf sample to a lab for diagnosis, farmers could upload an image of the diseased leaf for analysis.

Funding for the CellScope project comes from the Center for Information Technology Research in the Interest of Society (CITRIS) and the Blum Center for Developing Economies, both at UC Berkeley, and from Microsoft Research, Intel and the Vodafone Americas Foundation.The study can be found online on the PLOS website. 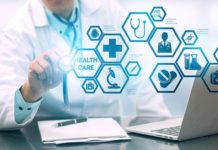