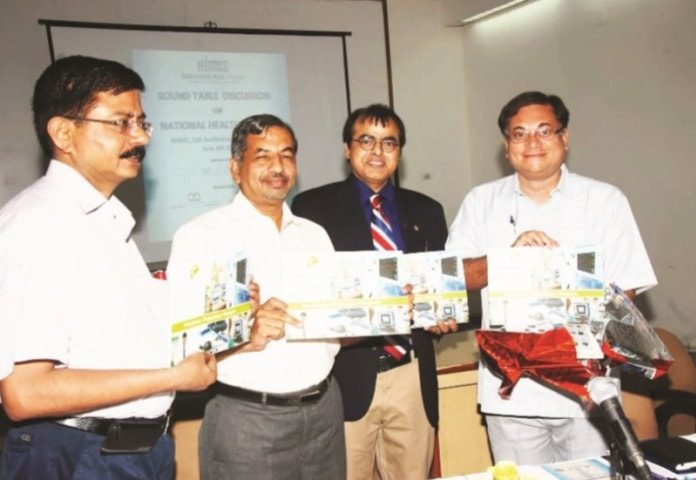 HIMSS Asia Pacific India Chapter organized a roundtable discussion on the National Health Portal project of the Ministry of health & family welfare at JLN Auditorium, All India Institute of Medical Sciences, New Delhi on 8thJune. The idea behind the roundtable was to discuss, share the vision behind the project and discuss ideas that could make the national health portal successful. The participants included senior officials of the Ministry of Health & Family welfare and senior healthcare leaders from the healthcare sector. This was the first roundtable of its kind on this very important project. 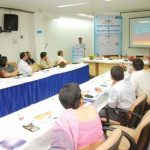 He highlighted the objectives of National Health Portal; improve the health literacy of the masses in India, improve access to health services across the nation, decrease the burden of disease by educating the people on the preventive aspects of disease.
At the end of the roundtable, an innovative implementation of digitization at AIIMS trauma centre was showcased by a presentation from Dr. S K Bhoi. Also, during this roundtable, the Report on medical devices and interoperability was released.
In the opening remarks of interactive session, Prof. IB mentioned on the three e-Health trends forecasted by UN on MobileHealth, Social Media in Medicine and Personalized medicine.
Main themes emerging from the roundtable discussion included;

• With ever increase in tele–density, it was suggested that the portal needs to be integrated with Mobile and apps developed.
• Health Information is crucial in making informed decision, the importance of Data Validation and authenticity of the Information posted by Contributors was stressed.
• Ever changing and day to day advancement in healthcare landscape demands a nearly real time update of the portal.
• With the current status in Healthcare Information Technology there is an urgent Need of e- Health Policy
• One of the participant suggested the health information should be integrated with Aadhar.
• Role of Social Media to increase the visibility was suggested. At present there are 22 official languages of India ,Use of vernacular language / Translation  to increase usability was advised. Taking a cue from CDC, Atlanta ,Health Advisory services related to Travel should be included in the portal. Need of Directory services of Clinicians, Pharmacist, Nurses and Para Medical staff was discussed. Adverse reporting, Pharmacovigilance   was also suggested to be included in the portal.
• To increase the user friendliness, tutorial Video on navigation of website should be a part of the portal.
• Participants suggested developing the portal adopting the Iterative model.
Representation from Doctors of Public and Private Hospitals, Senior Government Officials, Healthcare IT professional, Social Services Organizations, Students and academician brought out diverse thoughts and winning strategies for the development of the NHP.
Mr. Rajendra Pratap Gupta thanked the organizers Ms. MadhubalaRadha Krishnan and Amit Mishra and the supporting organizations Continua Health Alliance, Government Industry Dialogue, Disease Management Association of India and Mcura.

Prof. Rajendra Pratap Gupta is a leading public policy expert who has been contributing to policy making for over a decade.

Prof. Gupta has worked with some of the largest organizations across the world and was nominated to the Global Agenda Council of the World Economic Forum in recognition of his work & has served as an advisor to the Union Health Minister, Government of India.

He has served as CEO / COO at fortune 20 & fortune 500 companies in India. Besides, he has been invited by global organizations like the United Nations, World Bank, Asian Development Bank, World Health Organization, World Economic Forum, ITU, Embassy of the United States of America, Govt. of Japan & Finland, and also by the Ministry of Health, Ministry of Human Resource Development, Ministry of Labour and Employment & The Planning Commission - Government of India, for his views on diverse range of topics.

He played an important role in drafting public policies and became the youngest person to draft the election manifesto of BJP (currently the largest political party in India) in 2009 and also played a key role in drafting the BJP's Lok Sabha Election Manifesto in 2014. Besides, he has played an important role in drafting the National Health Policy 2017, National Education Policy, the policy (schemes) for Building & other Construction Workers (BOCW) - Ministry of Labour & Employment and the State Health Policy for Uttar Pradesh State on India.

He was recognised for his contribution in 2012 by the sheriff of Los Angeles, named the 'Thought Leader of the Year' three years in a row by ICT Post. Featured amongst the '25 living Legends of Healthcare in India’ and is listed amongst the “100 Most Impactful Healthcare Leaders”. He has authored a healthcare best-seller 'Healthcare Reforms in India - Making up for the lost decades' with Elsevier.

He is a member of the global guidelines development group at WHO, Global Steering Committee of Global Digital Health Index, Chairman - Personal Connected Health Alliance (India). Currently, he divides his time between public policy work and consultancy / advisory roles. 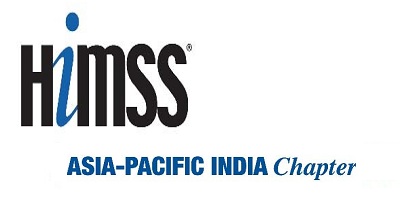 HIMSS Asia Pacific India Chapter mission is to lead healthcare transformation through the effective use of health information technology. HIMSS represents more than 44,000 individual members worldwide, of which more than two thirds work in healthcare provider, governmental and not-for-profit organizations. HIMSS establishes strategic direction and approaches on issues pertaining to the best use of IT and management systems for the betterment of healthcare by engaging stakeholders.