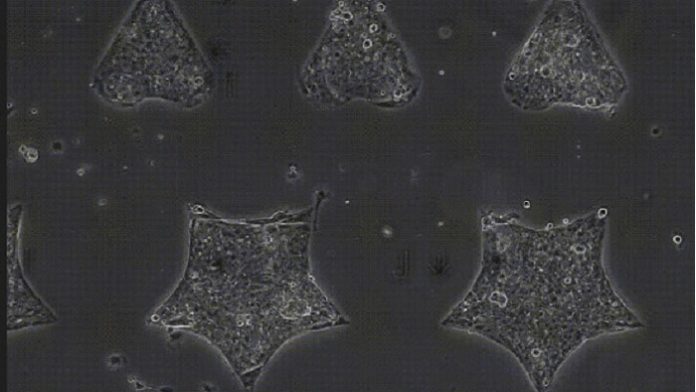 To understand how cells in the body behave, bioengineers create miniature models of the cells’ environment in their lab. But recreating this niche environment is incredibly complex in a controlled setting, because researchers are still learning all the factors that influence cell behavior and growth.

By observing and then modifying their engineered mini-models, scientists are better able to identify those factors.

This form of cellular research is essential to the study of regenerative medicine, which focuses on replacing or repairing damaged tissue, often through the use of stem cells, a special population of cells that can give rise to all tissues in the body. Bioengineers face the central question of regenerative medicine: what causes stem cells to grow, organize, and mature from a small population of cells to complex organs?

To find an answer, a research team from the Johns Hopkins Institute for NanoBioTechnology borrowed a process commonly used in the electronics industry called micropatterning, in which the miniaturization of shapes increases the number of transistors on a circuit. The team created micropatterned shapes, coupled with machine learning, to see how confinement influences stem cell maturation and organization.

The findings are published in the Proceedings of the National Academy of Sciences.

For the study, the research team, led by INBT alum Quinton Smith and postdoctoral fellow Nash Rochman, placed human induced pluripotent stem cells, called hiSPCs, in patterns shaped like stars, circles, triangles, and hearts. They then observed the cells migrating and filling the patterns. Interestingly, the patterns’ edges became densely packed with cells that organized and matured differently than the cells in the center, and expressed precursor markers that give rise to tissues such as the heart, muscle, and blood vessels. Observing self-organization in the lab has been an elusive goal for researchers in the regenerative medicine field, and the breakthrough provides a window into a complex process that occurs during human development.

Additionally, the team discovered a balance between cell tension and cell population density. As cells congregated and became more crowded at the edges of the shapes, they experienced more tension than the cells in the interior of the pattern, which seemed to trigger self-organization and the expression of those precursors that give rise to tissues. When there is no cell tension, self-organization won’t happen, indicating that mechanical confinement plays an important role in cell growth and behavior.

The study advances one of the primary goals of regenerative medicine researchers to one day repair damaged tissues using a patient’s own cells. While this is only one example, this technology can be applied to understanding the organization of a wide range of tissue development. “We need all these interdisciplinary approaches, which includes biology, engineering, and computational modeling, to ensure stem cells are stable, functional, and efficiently differentiate before using a hiPSCs source in a clinical setting,” Smith said.