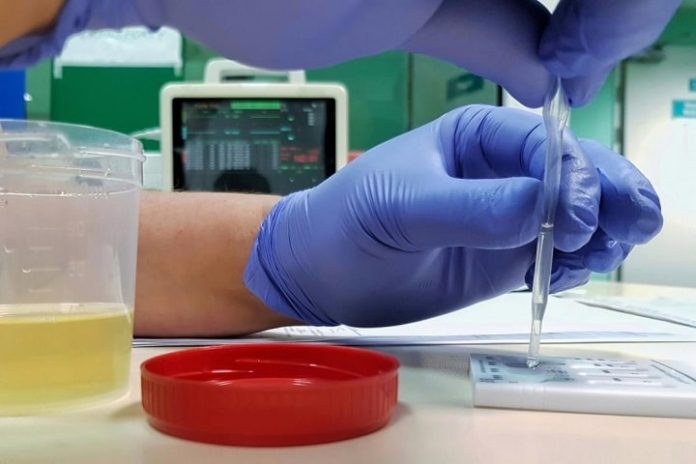 A urine drug test (also known as a UDS or a urine screen) is a painless test. It checks your urine for prescription drugs and illegal drugs.

A doctor can use a urine drug test to help identify potential abuse issues. Doctors can help you develop a treatment plan after a drug test has identified drugs that you might be using. To ensure that your substance abuse treatment is effective, you must submit to urine drug testing.

Employers, doctors, and sports officials may request urine drug screenings for a variety of reasons.

Doctor. If a doctor suspects that someone has been using prescription drugs or illegal drugs, they may request a urine drug test.

A doctor might request a urine test to check if someone is using opioids prescribed for chronic pain.

If they suspect that someone is acting strangely or dangerously because of drug use, an emergency service staff member can request a urine drug screening.

Rehabilitation Programs. To check if a person is sober, drug and alcohol rehabilitation programs might request urine drug screens. These tests are also required by prison officials for people who have abused drugs in the past.

Employers. Employers may request that employees who are new or already employed take a urine drug screen.

This is more common in workplaces with high safety standards. For example, an employer might be more inclined to test someone who drives vehicles or uses machinery.

Different laws regarding employee drug testing apply to different areas. It is best to check with your local authorities.

There are two types of urine drug screenings. The immunoassay is the most cost-effective, and it gives you results very quickly. It does have some drawbacks. It doesn’t pick up all opioids. It can also give false positives. False positives are when test results show that the drug is found in the blood, but no drug use has occurred.

A second test, known as gas chromatography/mass spectrometry (GC/MS), is performed to confirm the positive results of your initial test. This test uses the same method to obtain a urine sample as the immunoassay. Although GC/MS results can be more costly and take longer to produce results, they are less likely to yield false positives.

How Reliable Are Urine Drug Test

Cut-off levels are used for a urine drug test. A result is only positive if the drug level is greater than a certain threshold.

Results will show the amount of drug in nanograms per liter (ng/ml).

False-positive results can be prevented by having cut-off levels. These are possible even if a person has not used an illegal drug but has eaten legal amounts of hemp, coca, or opium.

In rare cases, eating poppy seeds before a urine drug test can cause the test to detect opium. The United States Anti-Doping Agency warns against eating poppies seeds before taking a drug screen.

A person who has only been exposed to drugs passively can be tested positive if they are below certain levels. Passive exposure can be seen in secondhand smoke.

How to Prepare for a Urine Test

It is easy to prepare for the test. A person usually needs to urinate in a container.

Important to remember that false-positive results can be caused by certain supplements and medicines, which could indicate illegal drug use.

If a person is taking any of the following, they should notify the test provider:

The urine drug test will be performed by a medical professional or technician. They may begin by asking someone to:

The technician will then direct the patient to:

The technician and the donor should both keep an eye on it until sealing is complete to ensure that it has not been altered. There are many people who use quality fake urine that helps them to pass the drug test.

Sometimes the technician will accompany the patient into the testing room to ensure that the sample is being given correctly. The technician should explain why they are doing this.

Some sites provide instant results while others do not. The reason for the drug test will vary. Often, the sample is sent to testing for a formal report.

The most popular type of urine drug screening is immunoassays. They don’t measure drugs. They detect the drug’s interaction with the body’s immune system, and the ability to form antigen/antibody complexes.

The drug test results are usually given in terms of numeric rather than numerical values if it is an instant result. The ng/mL measurement is not displayed on many instant immunoassay tests. Instead, the results are displayed on a test strip that turns different colors to indicate the presence or absence of certain substances.

A urine drug test is a quick and effective way to detect illegal or prescribed drugs in your body. Employers, doctors, and sports officials may request a urine drug test for a variety of reasons.

These screens can detect a variety of drugs such as marijuana, nicotine, and barbiturates. Some drugs are more easily traceable than others.

A person might need to repeat a second test if the initial result is positive.