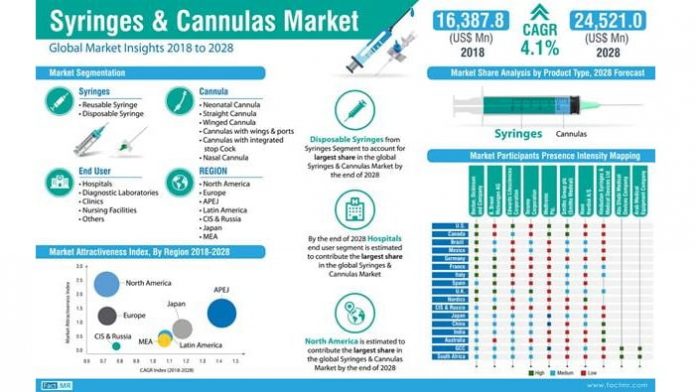 An above-average rise at 4% volume CAGR is foreseen for the syringes & cannulas market over the period of forecast, 2018 to 2028, by a new Fact.MR study. Pervasiveness of syringes in terms of the market volume share continues to prevail, whereas the growth rate will also remain higher for these products, compared to cannulas, through 2028. Additionally, majority volume share of worldwide syringes sales is estimated to remain hinged at disposable variants.

India’s preeminence as a manufacturing hub for fast-selling medical consumables such as syringes and cannulas is not confined to Asia, but also remains unabated worldwide. In a move to cut down cost of Indian syringe and cannula brands by more than 50%, a group of domestic manufacturers have decided on voluntary reduction of MRPs apropos of these healthcare consumables. This move rides the coattails of growing debate and speculation over handing the control of medical devices cost to the government. Additionally, the All India Drug Action Network (AIDAN) has demanded the government for immediate imposition of cost control on syringes & needles, along with medical devices notified as commonly used devices. China continues to remain the second-largest syringes & cannulas market in APEJ.

The market for cannulas will continue on its sluggishness, with increase in volume sales estimated at just 4 million units in 2018 over 2017, as compared to 572 million units of syringes. While volume share of worldwide cannula sales remain concentrated in variants featuring wings and port, nasal cannula are likely to record a relatively faster growth through 2028. Automatic activation of safety mechanism during the needle withdrawal, coupled with prevention of accidental needle prick injuries to healthcare professionals, is a key attribute of cannulas with wings and port that have sustained their demand in hospitals and clinics.

Nasal cannulas are witnessing higher demand owing to increasing global burden of COPD, with over 3 million deaths estimated worldwide by the WHO in 2015. Additionally, the breakthrough patient-centric solution, which ensures continuous flow of oxygen equivalent to dual-pronged cannula, has led distributors seeking competitive differentiation and innovative products to incorporate the product in their portfolio.

Hospitals continue to hold leading volume shares in the syringes & cannulas market, being the first point for treatment in most countries and affordable access to first-aid medical care. However, syringes & cannulas sales in clinics are likely to pick faster pace through 2028, with investment initiatives focused toward primary healthcare likely to result in growing number of clinics worldwide. Recent approval of US$ 105 Mn equivalent non-reimbursable grants for Government-based primary healthcare strengthening programs is a key aspect underpinning growth of clinics worldwide, which in turn will significantly affect future demand for medical devices such as syringes & cannulas in clinics.

The insights presented here are from a research study on Syringes and Cannulas Market by Fact.MR https://www.factmr.com/report/2007/syringes-cannulas-market